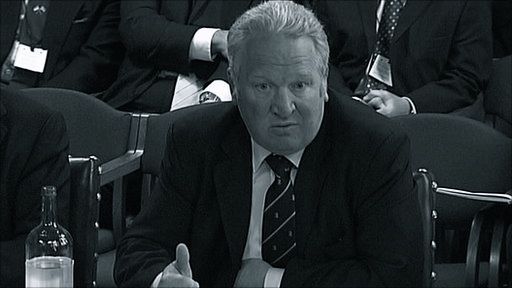 I introduce: The new Minister NOT for Disabilities. RIP Alf Morris

Aha! We have the first jewelled utterances from the new Disability Minister, Mike Penning. Except he isn’t called the Minister for Disabled People any more. In the Daily Mail of course. Where else?

I’m sure it will surprise no-one to know that this Government who have set about demolishing or undermining every single support and service sick and disabled people rely on, have abolished the role of a dedicated minister. He is “Minister of State for Work and Pensions” and his role only includes the issues of sick or disabled people.

This is the first time since 1974 that we have not had a minister soley focussed on the rights and inclusion of sick and disabled people. In 1970, Alf Morris (Labour) successfully introduced the Chronically Sick & Disabled Persons Act, the first in the world to recognise and give rights to people with disabilities. In 1974 he became the first Minister for the Disabled anywhere in the world. In 1991 he introduced a Civil Rights (Disabled Persons) Bill. (Wikipedia http://en.wikipedia.org/wiki/Alf_Morris)

Well, I say the first time, but in effect, Maria Miller singularly failed to champion the causes of sick and disabled members of society in any way at all. Esther McVey did little more, though at least she had the decency to mention access and transport issues here and there.

Both accepted the role and stood by silently as sick and disabled people saw a shocking 28 Billion stripped from their incomes and services. A full Fifth of the entire deficit reduction plan. This is the biggest single assault on the lives of those with disabilities in memory. They accepted their roles as members of a DWP team, not as independent ministers in place to challenge and inspire society to be inclusive, whilst challenging ministers to follow their duties under UK and international law to ensure basic human rights for those born to face great challenges.

They both accepted the poison chalice and both kept quiet. They were both promoted for their willingness to walk on by on the other side. They both lied repeatedly. Just search “Personal Independence Payments” here http://fullfact.org/ They both knew the details and have as many desperate constituents as any other MP.

Oh of course, he doesn’t tell you that in the article! That would be shocking. No, he makes these claims because ”Only 6 per cent of new disability benefit claimants have a face-to-face assessment with a medic, it has been revealed.” Read more: http://www.dailymail.co.uk/news/article-2466712/Disabled-benefits-farce-94-new-claimants-assessed-doctor.html#ixzz2iB9cPMJK

I’ll leave others to rebutt the half-truths, mistakes and outright lies in his article - they’ll do it much better than me and I can feel the deferred glow of a thousands heated keyboards smoking as we speak.

But it’s very important that the public know that what Mr Penning fails to mention is that the ONLY way someone can qualify for Disability Living Allowance at present on a paper assessment alone, is if their impairments and diagnoses are so significant, their medical evidence so strong, written by the GPs and Consultants that know them best that a Department of Work and Pensions own decision maker, has no doubt of a genuine claim and which rate it is appropriate to award.

They know that the conditions I list above and hundreds more will never get better. Many will only get worse. They know that it is a non-sensical waste of taxpayers money to insist that a non-verbal young man who will never walk or feed himself is put through the unnecessary trauma of attending a face to face assessment with someone they have never met. They know that the impairment will always mean that the individual will need our care and that life will always be more expensive for them than someone living without an impairment.

That’s why they make the decision to only see people when more information is required, or a face to face assessment might be helpful in complicated cases.

I wonder if faced with this new information, the tax-payer might actually agree, that it’s efficient to assess the people you need to assess and make the process as stress free and uncomplicated as you can for those who clearly qualify?

As the article states, the replacement for DLA, PIP is about to be rolled out. An incomprehensible 1 in 5 people will lose the support they need to get out of bed in the morning or get dressed or leave their homes. 1 in 5!!

If you were part of a government about to attempt to slash vital support so vastly, you’d need a pretty good line wouldn’t you? How would you even begin to convince the public that you’re right?

The only way is to imply that that 20% of all people in the UK relying on us to help them to live with the dignity we take for granted, don’t need us any more. It’s to imply millions didn’t really need the help anyway. No-one checked them, they could be saying anything! “Not seen by a doctor” implies they have nothing wrong with them, perhaps no diagnosis. But the headline refers to a benefits doctor not a GP or consultant.

You convince the public, just as you did with those who were too ill to work, that someone’s getting an easy ride, taking something for nothing. Taking them for mugs. All those people with Alzheimers and breast cancer, and kidney failure and severe brain damage.

And don’t you have to be a pretty special kind of soul to make that argument knowingly? Aware that misrepresenting the people you will harm is the only way to get things done?

**UPDATE Thanks to FOIs from Jayne Linney, http://jaynelinney.wordpress.com/2013/08/21/mcvey-answers-politicians-even-if-she-ignores-us/ and quick linkage from @Hossylass Caroline Richardson and Anita Bellows from DPAC (@anitabellows12) here are the figures Mike Penning refers to at the top of P6

As you can see, “Medical Examination Report is the 6% figure of those who were actually seen face to face by a DWP engaged assessor. 40% GP, 10% on the claim form they submitted alone, and 45% on “other evidence” perhaps a community psychiatric team or a consultant.

Courtesy of Sue Marsh at Diary of a Benefit Scrounger

No responses to “I introduce: The new Minister NOT for Disabilities. RIP Alf Morris”