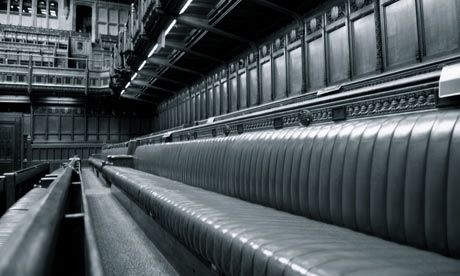 The House of Commons debate turned out better than I expected, despite the vast swathes of empty green leather being very obvious, but with some really very good speeches from the opposition benches. By contrast those by Chris Grayling and the government were lacking conviction, were confused and sounded arrogant as usual. In particular, he can’t get his head around risk and still clings to the notion that NPS and CRC’s will ‘co-locate’.

I know I’m hardly a disinterested neutral bystander in these matters, but listening to the argument from the opposition benches, the answer really is quite straight forward - give the extra work involved in supervising the under 12 month custody people to the existing well-performing probation trusts, at no extra cost. So simple, only ideology prevents it.

If there was any fairness about the whole charade, the government would have lost the division handsomely. But there isn’t of course and, supported by 56 weasel Liberal Democrats, the opposition amendment was lost by 66 votes. The full proceedings can be read here on Hansard.

I notice that a very full briefing document had been prepared by the PCA and although very thorough, at 13 pages in length I really wonder how many MP’s would be bothered to plough through it. I’m no media expert, but wasn’t this the right moment for a short and simple message from the PCA - you know something like ‘give us the under 12 month people to supervise for no extra cost to the taxpayer’.

To be honest this whole omnishambles is proving to me just how important the dark arts of media management really are, and sadly Napo, the PCA and PA seem to be completely at sea with it. It’s quite obvious that nowadays the likes of the BBC have to be spoon fed and led by the nose to a good story. As usual, it doesn’t get a mention.

On the other hand, despite confirmation that several probation trusts are now officially blocking access to this blog, including South Yorkshire, Cumbria and Thames Valley, viewing figures continue to climb steadily and now number on average 2,000 hits daily. A new record was reached yesterday of 2,598, just eclipsing the previous figure of September 19th when the probation service was officially advertised for sale. This seems to be the place to come in order to let off steam, share information and hopefully get a bit of support.

As was mentioned the other day,13 Police and Crime Commissioners have written to Chris Grayling expressing their concerns regarding the whole business, but to be honest it will only have real traction when independent or Tory Commissioners start voicing concern. Nevertheless, it’s a welcome further piece of support and at one page in length, can certainly teach the PCA something about simple messages and brevity.

An article in the Guardian highlighting a recent report commissioned by NCVO into Payment by Results is interesting and can be paraphrased as ‘there’s a problem with the payment and the results’:-

One of the big problems our review has identified is poorly designed targets for payment. Some targets had nothing to do with the desired outcomes – others were actually detrimental. Worrying too, are examples of providers being required to bear the risk of achieving targets that are not within their control. This problem is often exacerbated by an apparent assumption from commissioners that there is a direct link between an intervention and a successful outcome, which fails to take into account the complexities of working with certain user groups.

For example, a charity may provide an excellent service for a drug addict, but if something happens beyond its control that affects their rehabilitation – such as a family breakdown or a housing crisis – the targets may not be met.

In some cases, PbR had been used not as part of a structured plan for service improvement but simply because it was the political flavour of the month. In these cases, a previous contract was often crudely converted to allow for PbR, which means receiving much later payments for the same work. Such contracts often contain more prescriptive terms to dictate how the service should be delivered, limiting the possibility for providers to try new ways of delivering outcomes. It brings all the financial risks for providers of PbR contracts, but without the benefit of allowing for innovation.

The Guardian contains another hard-hitting piece by Zoe Williams, highlighting the sad fact that much of what is going on in our field gets little attention:-

Probation work is to be contracted on a payment-by-results basis, which we have already seen fail, spectacularly, with the Work Programme (cost: £5bn; result: much worse than doing nothing). The pattern with deterring recidivism will be exactly the same as it was with getting unemployed people back into work – it isn’t an accident. When you treat people as units of sale, a certain amount of human subtlety is lost. Sadly, this sort of work is almost all subtlety (let’s call it “caring about each other”, for brevity). The Howard League makes a convincing case for why the new system will be much more expensive, even without costing in its inevitable failures.

All this before we even consider the main point about probation – the thing that gets it into the news, for good or ill – which is that it protects the general population from dangerous prisoners. The Ministry of Justice doesn’t even describe how it plans to distinguish between “high-risk” prisoners (who are staying in the public sector) and “medium-to-low-risk” ones (who are to be outsourced).

The root of this is about more than probation. If you’re a large corporation looking to wring the UK government for every penny it has and then some, these are the places you look – away from the main traffic of public discourse, in the dank side streets, where careers get lost and battles become too dirty to yield a clear victor – probation, adult social care, prisons, tagging, court interpretation. This is where the cash is, because nobody’s looking. If the Olympics fiasco had happened in outsourced security services for the UK Border Agency, we probably still wouldn’t know about it. Hell, these fiascos have probably already occurred in the UKBA and we won’t find out until 2027.

This is yet another example of the haemorrhaging of public money into private hands, and the first step in opposing it is to notice – resolutely notice – that it is happening.

No responses to “The morning after”