Is it possible to improve the quality of housing for people on low incomes in an unequal society?

That might be a strange question but the case of the Decent Homes Standard shows how hard it actually is to improve the quality of social housing when society is unequal.

The Decent Homes Standard was introduced in 2000 as a way of ensuring that all social housing in the UK was up to a certain quality.

It cost somewhere between £19 billion and £37 billion and was, by its own standards, a success.

Here is a chart showing, over time, the percentage of houses owned by local authorities or housing associations that met the standard. 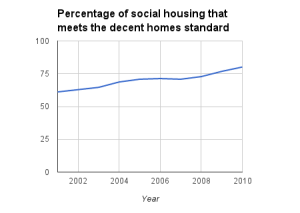 As a result of a significant investment of public funds many people had new kitchens and bathrooms and other improvements made to their homes.

You might expect that people who live in social housing would be much more satisfied with their housing as a result of this investment, but you would be wrong.

Here is a chart showing how satisfied people were, over time, with their accommodation. 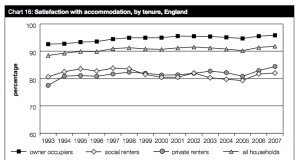 We can see that there was no noticeable increase in the number of people living in social housing who said that they were satisfied with their accommodation.

If a government spends public money improving the quality of social housing, this doesn’t stop middle class people who own their own homes spending their own money (or their parents money) improving their homes.

In fact, it is conceivable that public investment in social housing might encourage middle class people to spend even more money on their homes, to make sure that their homes remain of a higher quality than social housing.

Housing is, to an extent, a ‘positional good‘, a lot of the value of a house comes not from some objective measure of it’s worth, but through a comparison with other houses. It gives people little satisfaction to look at their kitchen and to think that it is much better than the kitchen their grandparents had, when their neighbours have a nicer kitchen still.

No responses to “Housing quality and equality”