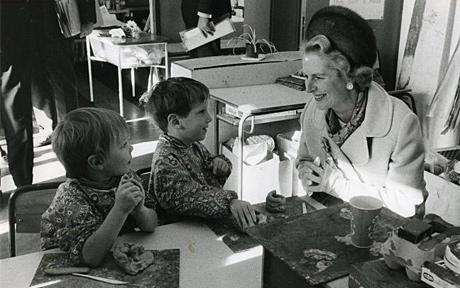 “I want to make this the most family-friendly government the country has ever seen” – David Cameron, 2011

A few weeks ago, I picked up a book called ‘Punishing the Poor: Poverty under Thatcher’ from the University library. When I started reading it, I was struck by the apparent similarities between the language used and policies pursued by the Thatcher government and those of the current Coalition government. The criticisms of the Thatcher administration (and there are many of them in the book) are, in my opinion, very similar to the criticisms that are being voiced today about a wide range of issues and groups affected by welfare reform and ‘austerity measures’.

This may come as no surprise to many readers but I believe it is noteworthy given that David Cameron has made much of his ‘Compassionate Conservatism’ approach and has sought to distance himself from Thatcher’s ‘controversial approach’. He is also currently leading a coalition government with the Liberal Democrats that has suggested that their hands are forced in certain policy areas as a result of the current fiscal climate. This post highlights some of the main perceived similarities between the policies directed towards families and children, despite the differences listed above.

The rationale for welfare reform outlined by both governments is strikingly similar. Britain had become lazy, the welfare state had ‘trapped’ people into a cycle of dependency and a new focus on responsibility and independence was necessary:

“I came to office with one deliberate intent: to change Britain from a dependent to a self-reliant society; from a give-it-to-me to a do-it-yourself nation; a get-up-and-go instead of a sit-back-and-wait-for-it Britain”

“Let’s bring on the can-do optimism. Let’s summon the energy and the appetite to fight for a better future for our country, Great Britain.

Frankly, there’s too much ‘can’t do’ sogginess around. We need to be a sharp, focused, can-do country.

“The level and scope of benefits have been improved in anticipation of a growth in output which has not been achieved. It is a striking example of the nation’s capacity for spending money before it has been earned”

“The previous Government attempted to hit poverty targets by paying out more and more in welfare payments so as expenditure grew poverty for working-age adults increased and mobility failed to improve. Vast sums of cash were spent but the rungs on the ladder to prosperity didn’t move any closer together. Limited social returns were delivered despite significant income transfers leaving the taxpayer with an unmanageable level of debt.”

The Coalition Government have received criticism as a result of the impact of their policies and their budget on women and David Cameron has also come under fire for his perceived attitude towards women and has recently appointed a policy advisor to specifically address this issue. Support for the Conservatives amongst women is particularly low. Margaret Thatcher was also criticised for undermining the position of women in society and, in 1982, famously said:

“The battle for women’s rights has largely been won. “The days when they were demanded and discussed in strident tones should be gone forever. I hate those strident tones we hear from some Women’s Libbers.”

In a chapter called ‘Women and Children Last’, the authors of Punishing the Poor highlight that:

“Government policies, which have reduced the employment rights of women at work, restricted their opportunities to retrain and enter the labour market, and ignored the need for childcare, help to ensure that they have no choice but to stay at home”

These concerns are similar to the current employment situation facing women and, interestingly, in a review of the Green Paper of 1985, the Equal Opportunities Commission stated that it ‘does not at any point, in discussing the shape of future state provision, address the particular needs of women’. This echoes concerns raised more recently by the Equalities Minister Lynne Featherstone that government departments ‘will be in breach of equality laws if they do not examine the potential for cuts to fall disproportionately on women’ and the legal challenge by The Fawcett Society to the Emergency Budget in 2010.

The similarities between the two governments continue in their approaches to child benefit. Andrews & Jacobs suggest that:

“The importance of ‘the family’ in the iconography of Thatcherism gives Conservative policies towards child benefit particular significance. More than that, however, it commands the high ground in the political battle between universal benefits and selective (‘targeted’) benefits. It represents the crucial divide between those that argue that there should be positive policies for families …and those that feel that the welfare state and family policy should be confined to relieving poverty.”

It notes that ‘child benefit could not be taken for granted. As part of the first tranche of public expenditure cuts it was frozen at its April 1979 value of £4 until November 1980’ (It was also frozen again in 1988). George Osborne, in the 2010 Budget, froze child benefit for 3 years from April 2011. Osborne, however, has also withdrawn child benefit from higher tax-rate payers which was something that the Thatcher government considered doing but never fully pursued. It should also be noted that Gordon Brown, whilst Chancellor, considered means-testing Child Benefit, but again didn’t implement this proposal.

Child tax credits have also been cut by the Coalition Government (prompting a suggestion that the fight against child poverty had been abandoned) and government contributions to Child Trust Funds have also been withdrawn.

However, Conservative politicians have suggested that families shouldn’t have been overly concerned about the financial implications of these policies. In 1987, Michael Portillo suggested that the equivalent of 4p per day was not worth worrying about and that ‘The help that the Conservative Party gives to the family is much more than cash support. We give vigorous moral support.’ Iain Duncan Smith, echoing these words 24 years later wrote that ‘Whereas the previous decade saw increased welfare payments achieve little but marginal changes in income our focus …brings lasting improvements for children as they benefit from a positive role model, a healthier and happier family, and a more stable home life.’

Andrews & Jacobs note that the Green Paper of 1985 proposed the abolition of the universal maternity grant of £25 and also introduced stricter eligibility conditions for the maternity allowance. They claim that ‘The key criticism of both proposals is that they underlined the complete and historic failure of government to take seriously the need to support mothers during and after pregnancy’. The current government have also withdrawn a range of maternity and baby related benefits including the Sure Start Maternity Grant, the Health in Pregnancy Grant and the Baby Element of the Child Tax Credit – on top of the other changes already highlighted. This led the Daily Mirror to announce that babies were paying for bust Britain and they calculated that the potential loss to families as a result of these changes was £1735

There are other areas of welfare reform and efforts to tackle poverty where there are also striking similarities between the two governments, including policies and language targeting young people entering the labour market, people with disabilities, welfare fraud and differentiating between ‘claimants’ and ‘taxpayers’. The focus here has been on policies related to families and children.

Some readers may wonder what all the fuss is about. Two governments with strong Conservative influence pursue similar policies and use similar language to articulate them. So what? I would, however, reiterate the points I made in the opening couple of paragraphs that suggest there should, perhaps, be a more discernible difference in approach between the two administrations for a number of reasons including recent public pronouncements that the ‘Conservatives have changed’, the emphasis on the constraints imposed by the current economic situation and the potential influence of the Lib Dems.

It should also be of interest to poverty campaigners and workers in the field as the % of children living in poverty grew from around 14% in 1979 to around 26% in 1989. Current child poverty projections are heading in the same direction.

It would, of course, also be interesting to examine the language used by the intervening Labour administration, who certainly talked of responsibilities as well, and who also received criticism for ‘failing family policies’ but that will have to wait for another post…

No responses to “Women and children last?”