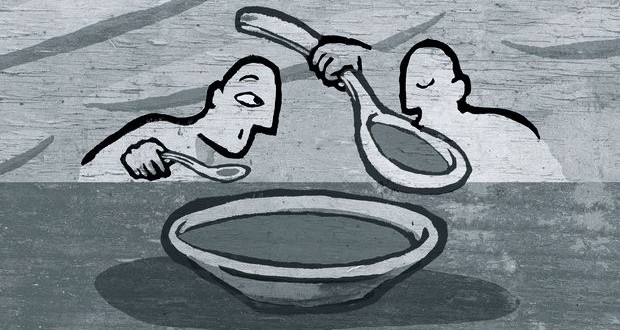 The 1996 and 2013 reports makes truly depressing reading, but should come as no surprise to those warning of exactly these results from ideological austerity policies.

The report links the recent acceleration in rising inequality to austerity, but as the rise started well before austerity the report implicitly calls out neoliberalism itself by holding the key policies of neoliberalism responsible. These policies force down wages, weaken collective bargaining rights of working people, remove social support to balance the failures of capitalism, weaken or remove regulations and legislation governing price controls on core services such as transport, accommodation, food and energy – meanwhile allowing excessive pay rises for top percentile jobs, regardless of social value or added or how these salaries were procured.

Something’s trickling down, but it’s not the wealth

The Human Development Report is yet more conclusive evidence that Thatcher’s neoliberal idea of the ‘trickle down effect’ (that a minority becoming super wealthy benefits us all) is nothing more than a fairy tale to keep the paupers quiet. American writer and Nobel Prize winner John Steinbeckonce wrote:

If we aim for precision rather than quotability, we can say that neoliberalism became the dominant ideology of the developed world because the poor were taught to view themselves not as the exploited proletariat but as temporarily embarrassed millionaires. The success of Thatcher, Blair, Cameron and other Neoliberal zealots in UK political past and present is to nurture our ego and foster a sense of ‘every man for himself’. Never mind that an ever decreasing number of us will actually fulfil the promise of elevating our social standing, or that those left behind are suffering ever worsening conditions – just look after your own interests, it’s all about ‘self-reliance’.

The self-reliance rhetoric from the current government might be the hardest to swallow yet, considering that so many key figures in the austerity onslaught wouldn’t know self-reliance if it smacked them in the face.

In the face of all this, David Cameron recently announced triumphantly that that the Tory party was ‘no longer the party of privilege’…at a £400 a seat champagne ball. Yet this recipient of such privilege has the audacity to call out the poorest sections of our society as exhibiting a ‘something for nothing culture’.

Rich get richer, poor get poorer

In the latest step to remove transparency of the ever growing gap between rich and poor, David Cameron has chosen to block publishing of figures showing the inequality gap in Britain.

We are playing in a casino where the house always wins. The myriad losing players are blamed for not playing hard or smart enough, while upstairs the confiscated wealth of all those losing parties is spewing from a wall in the VIP room full of over indulged, never exerted owners. The worst part of it all is even if one of those players in the casino does win…they merely enter the VIP room and become a member of this exploitative class themselves. There is no victory for humanity, only safe harbour for a single human.

I don’t know about you, but this doesn’t strike me as the most compelling dream humankind ever had – which is probably why they have to work so hard to convince us all that it is, with ceaseless films, books, magazines, adverts and so on screaming 24/7 ‘YOU CAN MAKE IT IF YOU TRY!’.

Just take a moment today to really consider what this morally and literally bankrupt ideology is promising, for you, your family, your community and your planet.  Is this the best we can do? If the answer is not a categorical no…it’s time to turn off the television, and remind yourself of greater aspirations.

Time Banking – imagine a world without money…now you don’t have to. Time Banking is taking off across the UK and the world. The currency is your time and what you do with it, and everybody’s time is equal. Check it out.

Community Gardens – learn to grow things and share things while recapturing that lost sense of community.

Debunking Economics – read this book, the single greatest destruction of the whole economic paradigm we live in that I have yet come across.

Binding Chaos – this will make you cry, stamp your feet, then never fall for this rubbish ever again.

No responses to “Wealth inequality in UK now equal to Nigeria, UN report”