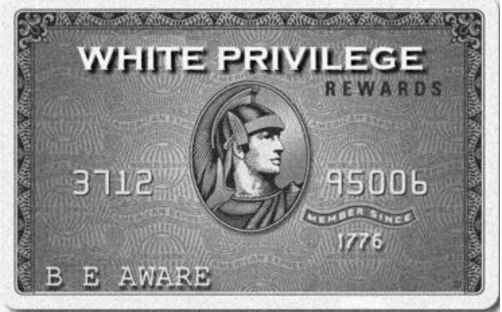 A question of privilege

Although this is an old video listening to it really made me think. I loved studying sociology but it was only after I finished it as an A Level subject I discovered privilege. The concept that social inequality in society for some groups is framed by class, gender, race, orientation.

My introduction to the subject of privilege came through studying the theme of the video. White privilege. For those who don’t understand that it’s a concept used in race studies which often explains how in Western society (English speaking and other) people and systems will lean more towards favouring those who are white. An ethnic penalty if you will. Societal institutions ensure that such privileges favour whites as a racial group in the media, politics, business and education.

Personally I hate dualism. Them and us arguments. White vs Black arguments. I find them silly especially as they tend to be based on premises of division as opposed to a meeting ground. Race as a social construct also excludes other skin complexions brown, bronze, yellow(?) and suggests that such a construct is a suitable way of analysing demographics. Yet no matter my opinion it is evident our criminal justice system, politics, consensus and many other institutions where we are identified other than by gender focus on race, regardless of the fact it is non scientific and is somewhat a divisive way of classifying people.

The trouble I have the term white privilege as a whole is the the grouping of all white people into one group. The disdain which many Brits have had for foreign workers from Eastern Europe for me remains a challenge. The way middle class communities and media look down their noses at working class. Chav. Gippo. White trash. Disadvantaged. Choose your label. Yet on the same token I can understand why some will see this an issue. For some evidence of this will be experiential and for others there are a wealth of studies which show that societies perceptions and expectations around social groups will tend to lean towards white privilege. Check missing white girl syndrome out in your own time.

Again my issue is that an all embracing term of white privilege conversely allows for generalisations to made about blacks, browns and all shades in between. I get the tone of the video but I think we are missing a bit of the puzzle here.

Talking of privilege. Earlier today I was challenged on Twitter. Got me thinking about male privilege.

I had recommended a number of people on Twitter. I noted that in my network a lot of the educators who I saw as agitators and disrupters were male. So I asked the following:

A response came back that I would get a better responses if I asked for women educators instead of females. By default was to think what the heck? I pride myself as a feminist so this came as a broadside. I don’t believe my statement was inappropriate but it got me thinking

Do we use language as a a default that is inconsiderate to women across culture?

Is male privilege such a embedded part of the male psyche that we don’t even realise that we behave in that mode subconsciously?

Does male privilege domestic violence or rape towards women get dumbed down because men are mostly victims of violent crime, suicide and homelessness?

The following tweet today even compounded the thought some more.

And yet male privilege has sub layers too. Of race. Power. Class. Orientation.

Which leads me to my last point about privilege.

The debate about marriage equality has been disruptive. Not only has it had to challenge notions as to what people call ‘normal’ but brought into the open challenges to a one size fits all (if you pardon the pun) approach to sexuality.

The ideology about same gender relationships has by and large been formed by religion and cultures aligned to that religion. If you are heterosexual unless you have conversations with bisexual, homosexual or transgender friends (or strangers) about how much other people don’t feel ‘comfortable’ to talk about another variant of sexuality you will never understand this privilege.

When you are surrounded by a culture which will not bat an eyelid of two heteros holding hands or sucking face in a supermarket queue but will recoil if they saw the same with a homosexual or transgender person(s) it’s time to ask why. Even some of the most liberal people I know would still probably flinch if they saw a gay couple kissing at a marriage. And to make it even worse the fact remains that while it may cool here in the UK to accept same gender adults to be married or be in a civil union there are some countries for them to freely travel to and be a couple could end in bullying, imprisonment and in the worst case scenario, death.

Checking privilege is about debunking stereotypes. It is about not being afraid to ask questions where one is unclear instead of projecting our own stereotypes. I cannot check white privilege where I see it and at the same token tell my children they have to work twice as hard as whites to succeed. I cannot check my own male privilege and dismiss a woman who would have a problems with me calling them luv or darling. Men and women cannot check heteronormative privilege whilst treating someone who is LGBT as other.

The thing is we probably don’t even realise the biases sitting in our subconscious until we are confronted with something that takes us out of our comfort zone.

I am comfortable in my own skin

No responses to “A question of privilege”