Posted in
Originally posted on InspGuilfoyle

As I go about my formal and informal research into the effects of target-driven performance management, I regularly have conversations with people at all levels of organisations.

One thing I’ve found is that the people at the very top of organisations tend to be intelligent, articulate individuals who genuinely care about their organisation and want it to perform well. I’ve also discovered that those who advocate targets usually do so in the honest belief that they are a necessary feature of performance management. It’s ingrained in their thinking.

Something else that I’ve become increasingly aware of is a common theme amongst the comments made by these very senior people.

Recognise any of these? 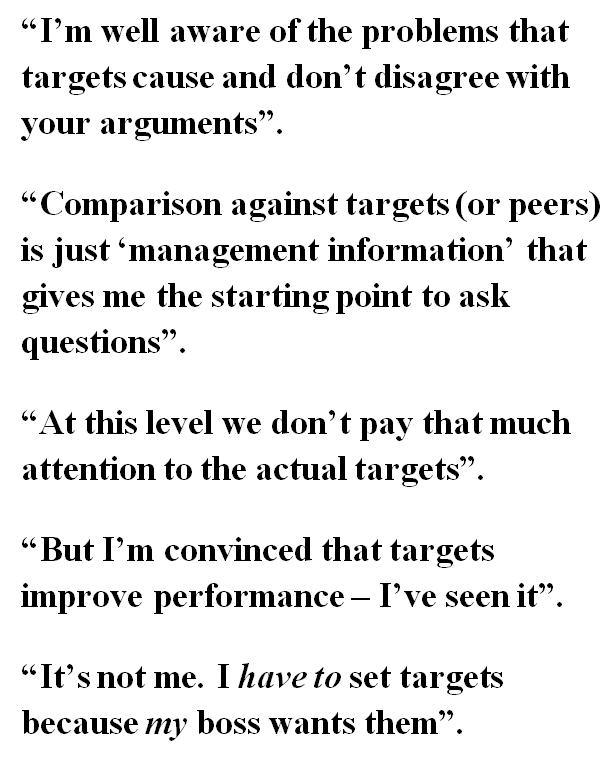 Let’s have a look at these viewpoints in more detail, to try and encourage a different way of thinking about the ‘targets conundrum’.

My response to this is usually, “Well get rid of them then!” It’s simply about making a cost/benefit analysis to assess the risks involved. If you already know that targets are likely to cause gaming, cheating, data distortions and other dysfunctional behaviour, why retain them? This normally leads onto a discussion about what else could possibly be out there if the targets are removed. The answer? MEASURES. ‘Right measures, measured right’, remember? (See here for more – Getting measures confused with targets is such a common – and fatal – mistake. They are totally different things!)

I’ve heard this one a lot. The problem is that comparison against targets or peers (usually in tabular and/or binary form) causes managers to ask the wrong questions. “Why is your team’s performance worse than the other team?”/“Why have you got more crime on your sector than at this time last year?”/“Why haven’t you hit your sales target for this quarter?” Starting out from a limited and often poorly-presented dataset, and comparing performance against a numerical target or the fluctuating variables that are inevitable amongst peer performance, increases the likelihood of incorrect assumptions and ill-informed decision making.

Oh, and don’t fool yourself that if you remove the actual numerical target but retain an ethos of comparing performance between peers (or against some random point in history) this is somehow better. This ‘league table’ approach leads to many of the same misguided assumptions and behavioural dysfunctions as targets - in essence it is akin to working towards an arbitrary moving target, rather than a static one. Avoid!

You know what? I really believe you. I suspect that most senior managers easily understand that there’s more to life than red or green arrows and don’t lose sleep if a couple of performance indicators are half a percent short of the target this month. I also believe that they take other relevant information and evidence into account when considering performance, and usually have an appreciation of the overall context.

The problem is that as you go down the levels of hierarchical organisations, the obsession with hard numerical targets intensifies. By the time you get to the front line, believe me, people DO pay A LOT of attention to the actual targets. The targets then become a focus for activity, driving behaviour and creating a culture of unhealthy internalised competition and individual blame. (See the nicely-drawn vicious circle in this blog post).

This can actually be true (sort of). Researchers Locke and Latham have shown that targets can, on the face of it, ‘improve’ performance.

The downside, however, is that this apparently improved performance cannot be sustained in the long term; furthermore, a range of evidence records examples of the dysfunctional behaviour that goes on behind the scenes to attain this ‘improved’ performance. We’ve looked at some in previous blog posts – ‘teaching to the test’, reclassifying crime figures, making arrests for ‘easy’ offences’, holding back funds until the next quarter, ‘hiding’ hospital patients in ambulances, cherry picking participants for payment-by-results schemes, excluding exam entrants deemed unlikely to succeed, ignoring important organisational responsibilities not subject of targets, prioritising what is easy ahead of what is important, outright falsification of documents, lying, cheating and so on. I hold a wealth of research papers on this and I’m happy to share.

What happens as a result of this is that your customers receive a worse service, costs go up, morale goes down, intrinsic motivation is damaged, individuals and departments turn against each other, risk is increased, reputation is adversely affected, critical interdependencies break down, waste swamps the organisation, and the system malfunctions. (All whilst hitting the targets!) I could go on.

So it goes back to the cost / benefit thing again. No matter how good you or your people are, these horrid consequences will occur when you throw targets into the mix. Is that apparent short term ‘improvement’ really worth the overall long term damage to the system? You decide.

This is perhaps the most interesting one to me. As a Police Constable I remember my Sergeant bemoaning targets, but saying that he couldn’t do anything about them because they were ‘what the Inspector wanted’. I hear Inspectors bemoaning targets but accede on the basis that they ‘must have them because the Superintendent supports them’. Follow the trail to the top of many organisations, and some Chief Officers/Chief Executives/Managing Directors will tell you that they acknowledge targets cause harm, but feel they are still somehow expected to have them.

Is it from the Home Office (although I’m sure I heard Theresa May insist there was only one target – ‘to reduce crime’?) Or the HMIC (the body that inspects police forces). Or the underlying political will. Or the media. Or the general public. Or simply an assumption that someone, somewhere expects targets to be present in performance frameworks.

Targets are implicit, but often no one seems to be able to trace the source. It regularly appears to be because of the person ‘one level up’. But is it? One senior officer recently told me that although he makes it known he wants officers to be free of targets and instead simply concentrate on doing the right thing, he routinely encounters frontline officers who are subject of targets which have been surreptitiously reintroduced at local levels.

The truth might be that targets really originate in the way we think.

So, if you believe targets must be an inevitable feature of performance systems, my message is that they are NOT. You might find that it is YOU who is inadvertently perpetuating them, not the person above you. If so, do something about it!

Finally, if I’m wrong and you can trace the source to someone who says ‘”I’m the person at the top and it’s me who insists on targets”, then let me know who it is so I can have a word.

Note – the comments discussed in this post have been made to me many times by many different people in different organisations. If you think you recognise yourself as having made them, don’t think this post is about you – it’s not. I just ask that you stop and think about what you’ve read.

Courtesy of Simon Guilfoyle at InspGuilfoyle

No responses to “Finding the source”