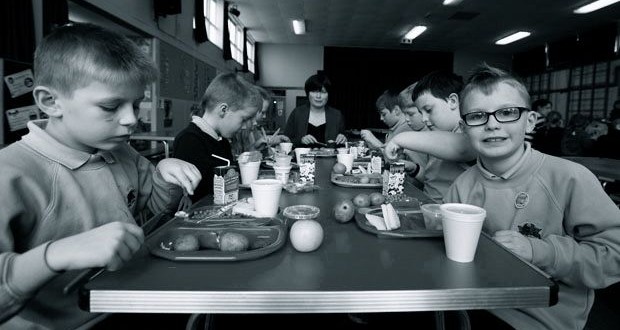 A government-commissioned school food review has recommended Headteachers insist everyone has school dinners, that means banning packed lunches which the report says are often less healthy than school meals because they frequently include crisps, sugary drinks and sweets or chocolate. Headteachers are also encouraged to ban children from leaving school at lunchtime to buy food such as chips and pizzas from local shops. However the review also says that take up of school meals is only 43% despite huge improvements in quality in recent years.

The Local Authority Caterers Association is very concerned about decreasing number of children choosing school dinners. If take-up dips below a certain point it will no longer be financially viable for school caterers to provide meals at all.

In our research to Poverty Proof the School Day we found many children and young people who are entitled to free school meals do not take them up because of the stigma it entails. For example we found a school in which children who had free school meals had to queue in a different line at lunchtime; in another school dinner money envelopes were collected in class on Monday morning, all the free school meal children had no envelopes to be collected. One school had a sophisticated biometric card system but the pupils knew who got free school meals because on school trip days they all got a standard school packed lunch in a brown paper bag. Children told us they preferred to go without dinner or nagged their parents to give them a packed lunch to avoid the shame of being identified as having free school meals.

Schools have taken the healthy food message to heart, vending machines that sold sugary drinks, sweets and crisps have been removed but we spoke to children and young people who told us they were all still widely available in school sold by enterprising young people on the ‘black market’. One young person even made a video about it in our video stories project.

Then there is the mystery of the missing free school dinner money. If your school uses a ‘credit card’ type system for school meals you can top it up at the start of the week and spend against it, the remaining credit is carried forward day by day. Not so for free school meals, the notional amount for a free school meal is £1.90 if you spend less than that then tough, all you get is £1.90 again the next day. But no-one seems to know where all those unspent pennies go? And finally what does £1.90 actually buy in the school canteen - can you get food and a drink or must you go without one because you can’t afford it?

Children North East supports moves to improve the health of children and young people especially healthy weights but the reasons why pupils chose not to eat school dinners are complex and need to be understood by listening to what the children have to say about them. It is only then that effective strategies to change behaviour will emerge.

No responses to “School dinners”