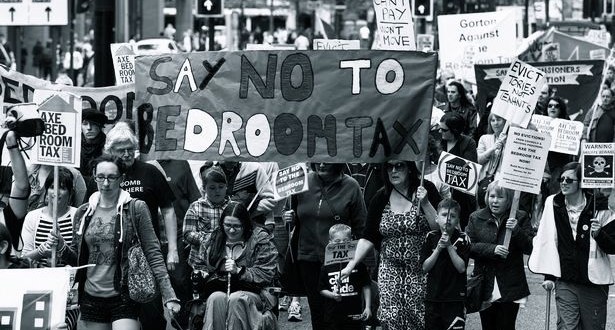 An open letter to Andrew Stephenson, MP for Pendle

Posted in
Originally posted on crazybladeuk

As you are very much aware, I have been affected by the Bedroom Tax since April, despite the Coalition claims that disabled people like myself would be unaffected. You are also very much aware of how much I despise this ridiculous and unfair tax on those least well off in society or, remembering that two thirds of those affected include a disabled member of the family, those who are already struggling with mental or physical difficulties.

This past weekend, thanks to the very kind assistance (aided by a small amount of cajoling from myself) of my landlord, Accent Foundation, my wife and I have moved into a one bedroom flat and out of the reach of the Bedroom Tax. Naturally, I would think that you would call this a ‘success’, right?

You could not be further from the truth.

Despite the fact that both the Coalition government of which you are a member and Pendle Borough Council being the ones that forced my wife and I into this move, we received no assistance from either during this move. Nothing.

Moving is never cost free. It doesn’t matter if you get help from family and friends (which we thankfully did and I am extremely grateful to them), there are still things that need to be paid.

Getting a plumber to connect up the gas cooker, getting new curtain rails and hooks, new curtains for different sized windows, buying cleaning products and the time it takes to clean in both properties. The stress and, for me, agony of trying to do little things to help with this. The costs of moving gas and electricity and water (which, whilst transferred quite easily is now costing me more than before), including paying off a small debt on the gas meter that came from the previous tenants. The damage to items during the move which will need to be replaced in the future. The cost of petrol to go to and fro between the properties - thank goodness that they are reasonably close together. Removal costs for the heavy items, which can be ludicrously expensive.

Covering these costs could have very easily pushed me into the arms of a doorstep loans company which would have seen me in a huge amount of debt. As it is I got lucky and was able to get a loan from a Credit Union. Whilst that is infinitely better than a company like Wonga, I am still now in debt because of this move.

When you add up the increased costs and the loan, I begin to wonder whether I would have been better to stay where we were.

But the main cost, the one that’s becoming increasingly hard to bear, is the effect this move has had on my wife.  Have you any idea how hard it is to sit and watch your wife sink further and further into depression and anxiety because of a move that should never have been forced onto us and, despite my anger towards this government, a move that I ultimately blame myself for?

I wonder how you would feel if it was your wife that has been in tears on many of the nights we’ve spent here, or that you watch helplessly as she struggles herself to deal with her moods.

The human cost of this bedroom tax - and don’t ever try to tell me that it is anything other than a tax - is incalculable. These are people, like myself, who should be concentrating on their health, not having to fight an ill thought and cruel out policy like this. Sadly, I can assure you that my wife and I are not the only ones struggling with the aftermath of a bedroom tax move, and this will only rise further as evictions rise and arrears increase.

I may be classed as being out of the bedroom tax but I assure you, we’re still feeling the effects of it and will do for a very long time, and I will continue to campaign as much as I can to not only raise awareness of this but to fight until you, or the government that follows you, does the right thing and scraps the Bedroom Tax.

Courtesy of Wayne Blackburn at crazybladeuk

No responses to “An open letter to Andrew Stephenson, MP for Pendle”