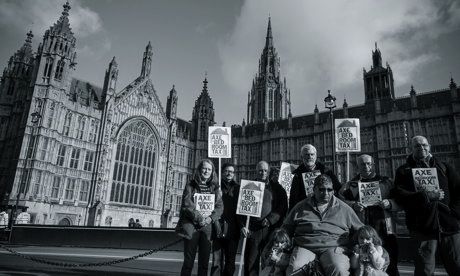 Posted in
Originally posted on 'Welfare Reform', with a Bedroom Tax Flavour

During a Work and Pensions committee hearing on Wednesday 12th February 2014, Ministers representing the government were called to give answers about welfare reform in the provision of housing. Lord Freud and Housing Minster Kris Hopkins gave telling testimony about how they view the law, how they view disabled tenants affected by bedroom tax, and their own ignorance around these issues.

I’d recommend that you watch at least some of the Work and Pensions committee session for yourself. You can find it here:

The pertinent bits start around timestamp 10:40:00. Debbie Abrahams, PPS to the Shadow Health Secretary, puts to Lord Freud and Kris Hopkins the suggestion that disabled people, who make up the majority of people affected by the policy, are struggling to meet the costs of the bedroom tax.

As context, on the same day, the National Housing Federation published damning figures concerning bedroom tax, focusing on the facts that two thirds of social housing tenants are in rent arrears, and 38% are new arrears attributed just to the burden of bedroom tax. Furthermore, 1 in 7 tenants has received a Notice of Seeking Possession - a letter threatening to take away your property and then to evict you if your debts remain unpaid. These figured are despite huge efforts by Local Authorities and Housing Associations to manage and mitigate the worst effects, although these efforts are patchy and inconsistent across the UK.

Lord Freud spends several stilted minutes attempting to break down the percentage of disabled people who are *really* deserving, and those others who only qualify under the Disability Discrimination Act. Decent people might find this distinction a little curious. To Lord Freud, it’s important that he specifies that only some 180,000 disabled people are being asked to pay money from their already inadequate ‘benefits’ to subsidise a generational governmental failure to build houses, take control of resultant rent rises and the inevitably increased Housing Benefit bill this produces.

On the subject of those deserving disabled people in receipt of benefits, Freud offers a confused argument suggesting that the bedroom tax policy is not designed to force people in adapted properties to downsize, and that even people in receipt of Disability Living Allowance who don’t live in adapted properties but require the full time care of a family member, or require their ‘spare’ room for equipment, should not be expected to move or to pay. He suggests that Local Authorities award Discretionary Housing Payments (DHPs) - a form of payment that has traditionally been intended to be short-term and temporary. Many LAs expect applications for DHPs to be repeated as regularly as every three or six months. Despite repeated questioning, Freud seems to think that exempting disabled people is a task beyond the ability of his department, and that instead this group should be made to repeatedly re-apply for DHPs.

The disabled people that Lord Freud jauntily consigns to these constant reassessments often have conditions that are never going to get better. Lord Freud doesn’t seem to mind this. He points out that DHPs are the way the government has decided to deal with disabled people, and to him, that is the end of the matter. He doesn’t mention the intended decrease in the DHP budget for the next financial year and to his credit, nobody on the Committee asks him about it. At one point, Freud attests, without any way of explaining how it would be implemented, that rather than define exemptions for any group, temporary, short-term DHPs could be made a permanent solution for some tenants. This suggestion is made without irony.

Contrary to a ruling in a High Court case that the DWP has previously lost, Freud goes on to suggest that people in receipt of Disability Living Allowance, or the newly-coined Personal Independence Payments, who do not use this money in the commissioning of care, should have this benefit taken into account as ‘income’ for the purposes of deciding whether they qualify for a discretionary housing payment. It’s difficult to imagine that the welfare reform Minister could be so ignorant of the court cases that he’s already lost that he’d make this claim, but he just goes right ahead and suggests enforcing a means test that’s already been deemed illegal.

Freud goes on to look a bit befuddled about bedroom tax exemptions for carers. DWP statistics show 60,000 carers are affected by the bedroom tax, but even though they are entitled to only £59.45 per week in Carer’s Allowance, Freud doesn’t seem perturbed that they’re expected to pay an average of between £14 and £25 per week from this for bedroom tax. Freud also doesn’t trouble himself with the money that carers save the public purse.  In the context of bedroom tax, to him carers are simply a drain on public funds.

So the debate passes to Kris Hopkins, the housing minister who can’t seem to make a comment without stumbling over his own unpreparedness for the role. Whilst giving evidence to the Work and Pensions Committee, Hopkins disingenuously intimates that homelessness is in decline, even though in order to reinforce this he claims he doesn’t have figures from before 2013, which are available from Shelter, here.

Hopkins also argues, in complete opposition to evidence, that the cost of private rents are ‘effectively’ decreasing, though again he is forced to ignore historical data from the Office for National Statistics in order to make this claim.

Dame Anne Begg repeatedly points out that Hopkins’ claims are at odds with all the other evidence the committee has received. Answering a question from Debbie Abrahams about how the DWP intend to protect vulnerable tenants from financial hardship brought about by welfare reforms, Hopkins ploughs into the most distasteful part of his presentation, the summary suggestion that disabled people aren’t really that disabled.

“There’s no doubt that the cultural change, the behavioural change of tenants, and the way that housing associations work, y’know, um, requires a huge amount of intervention to be able to correct that, and there are, you know, vulnerable people, there are individuals who are set in their ways about the way that they spend and they use their monies”.

There is consternation from the committee, and Hopkins changes the subject, talking about evidence that he can’t back up, suggesting arrears aren’t as bad across the sector as the data that has been presented by the National Housing Federation (what would they know?) suggest. Then, just in case there was any doubt that he wasn’t suggesting disabled people could improve their situation by a cultural or behavioural change, he goes on to voice his ignorance once more:

“What’s not happening is the introduction of a policy, to a group of individuals, which obviously are very different in many different ways with different demands, and you’ve mentioned disability was one of those issues there, How do we actually change the culture, and the behaviour, and one of the issues…..”

“Minister, I was specifically asking about disabled people. Now to suggest that behaviour change will alter a disability is quite shocking. So I am asking specifically about how the disabled people who are affected by the bedroom tax, the most vulnerable group in society….”

“Can I just respond to it then, I think first of all people who are disabled make a huge contribution to society, and wherever we can, we need to support them to do that, and part of this process is enabling some of those individuals to do that”.

Clearly Hopkins isn’t talking about any of the documented welfare reform outcomes, where evidence suggests that this is the opposite of what the government is doing. He goes on to pluck incorrect DHP figures of £445m over two years out of thin air, and swiftly moves on to repeating the familiar Department for Work and Pensions mantra about people being ‘trapped on benefits’. Hopkins seems to imagine that somehow taking money from the poorest people in society to pay for properties they’ve been allocated is some great scheme. He infers that this will prompt disabled people who are too unwell to work, and who rely on social housing, and the system of social security that they’ve often paid into to rise up and work themselves out of poverty. He suggests that disabled people have chosen the relative poverty of a life on social security, with disabilities and illnesses presented by the minister as nothing more than a convenient way of claiming benefits.

The infuriating ignorance of the real lives of disabled people affected by the bedroom tax that was displayed by both Lord Freud and Kris Hopkins gives a pertinent insight into why the government feels comfortable pursuing draconian policies that financially, societally and emotionally punish those groups of people:

They simply don’t understand what they’re talking about.

Courtesy of Rob G at ‘Welfare Reform’, with a Bedroom Tax Flavour