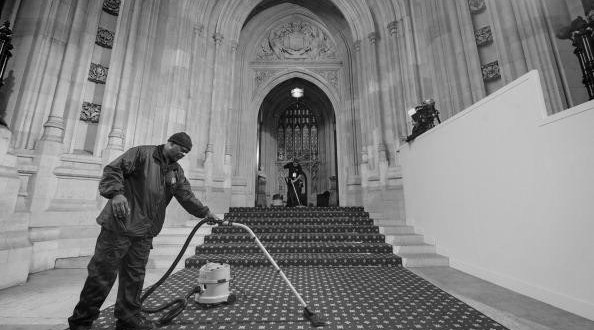 It was announced yesterday that MPs could receive a 30% pay rise, seeing their wages rise £20,000 a year to £86,000. Meanwhile, the average wage earner in the UK has seen their wages drop 20% in real terms since 2008. The Government is certainly Making Work Pay …just not for 99% of the population.

In the last five years, wages have increased by just 10%. The UK Essentials Index which focuses on the kinds of everyday items which the UK’s working and non-working poor buy, showed an inflation rate of 33% during the same period. This means that for the poorest working people, their wages are worth 20% less than they were back in 2008.

It’s getting worse. In the UK today, the cost of living is rising at four times the rate of wages. In fact UK wages are falling faster than any other ‘developed’ country. As a result, the three most expensive benefit payments in the UK are not ‘out of work’ benefits. 65% of the total spent on working age benefits, is going to people in work.

Tax Credits, Housing Benefit and Child Benefit, totaling £56.4bn a year, have been set up for the taxpayer to subsidise poverty wages.

The non-poor are also facing cuts in their income under the guise of austerity, with the average disabled person in receipt of state support losing £4,600 a year.

The same executives cutting their employees’ wages in the name of austerity were simultaneously approving inflation busting pay rises for themselves.

The banking sector, whose excesses led to the banking bailout that triggered ‘austerity’ – are enjoying bumper bonuses.

The aptly named Rich Ricci, Head of the Barclays Bank investment division, received a £17.5m bonus on budget day this year. It would take the average worker 656 years to earn this much.

RBS received £45bn from the UK taxpayer in bailouts after its investment division brought the bank to its knees. Yet, in 2010, RBS increased the bonus pool for its investment arm by 5%, despite making a loss that year.

We are not ‘all in this together’.

It’s not a recession, it’s a robbery

The most important realisation the average UK citizen can make now, is that there is no such thing as austerity. What is actually underway is a transfer of wealth, from the have nots to the have lots. The Government is not cutting spending, it is 4% higher now that in 2008. It is transferring spending from public services that help the poorest in the land, to tax cuts, wage hikes and privatisations that help wealthiest in the land.

One cannot simply wait this thing out. While the majority remain procrastinating moderates, the noose is simply tightened around our collective throats, choking off the possibility of a fight back. In the words of Mark McGowan, The Artist Taxi Driver – even if you think you cannot stop this madness; as an absolute minimum you put up a resistance.

To quote an African Proverb, made famous by the Dalai Llama:

“If you think you are too small to change the world, try sharing a room with a mosquito.”

Sign the Petition – for no MP pay rises while they continue with austerity.

The Artist Taxi Driver is making a movie called ‘Its Not a Recession, It’s a Robbery’ going around the country interviewing those being enriched and defrauded by austerity. You can sponsor the project here.

UK Uncut – join the campaign to get wealthy people and corporations to pay their fair share.

Time Banking – become a part of the new economy – of time not money. You can use skills and talents to earn time bank credits, and cash them in for goods and services from others.