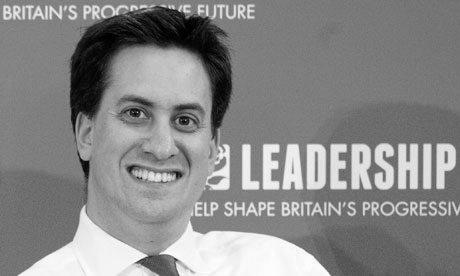 The political class: What is Ed Miliband’s problem?

There’s been no shortage of advice offered to Ed Miliband over the past couple of weeks. Here’s a bit more: your problem is the political class you come from and remain trapped within, specifically its defunct and discredited ideas of ‘leadership’. Make a radical break from these and you might stand a chance.

It’s not been a great week for the political class. The Con-Dems were caught seemingly stealing money from a dead woman (money that was supposed to be gifted to the nation), the Tories tried and failed to hide the continuing calamitous decline in their membership (apologists subsequently suggested that party membership is an ‘outdated figure’), the outgoing austerity-preaching governor of the Bank of England happily accepted £26,000 of public money being splurged on his leaving parties (plural), it was revealed that some senior civil servants are having their perks paid tax-free by Whitehall departments - and Ed Miliband got egged.

The last incident was in many ways the most meaningful (the others being almost too made-to-measure as metaphors and, such are our low expectations of the political class, were met mostly with a collective shrug). Meanwhile, Miliband’s egger, the formerly homeless Dean Porter, was quoted as saying by way of his motivation:

I’m no advocate of egging, but the quality of Porter’s political analysis was pretty solid. Ellie Mae O’Hagan suggested in the Guardian that Ed Miliband got egged for not having the guts to stand up to austerity. Maybe, but this points to the central mystery about Milband since he became leader. He had the considerable personal courage to stand against his own (Blairite) brother and win, but this courage seems to have faltered when it comes to standing-up for what he believes in any consistent way, let alone standing-up against austerity politics.

The answer to the mystery lies not in his personal courage as such, but in Miliband’s political community. As John Harris pinpointed this week in his enquiry about ‘Where is Labour going wrong?’, Miliband is trapped in his political class:

“[Miliband] still faces an onerous challenge, about which he often seems to be well aware: thinking his way out of his Westminster background, and trying to somehow embody a new approach to politics.”

The grumblings around Miliband’s leadership over recent weeks has been partly motivated by Labour’s faltering poll ratings - important, but symptomatic of the narrow Westminster game that focuses on week-to-week opinion polling and ‘positioning’ rather than the day-to-day experience of ‘ordinary’ people struggling to pay the bills and get through life in a manageable way. Thus the advice that has been ‘offered’ to Miliband from inside the political class has largely been limited to political tactics, rather than practical suggestions for improving people’s lives (for example how to avoid the situation where people are going without heating in face of stagnant incomes and price rises).

From his ‘allies’, Andy Burnham helpfully proposed that Labour needs to ‘shout louder’ (whatever that means). (Cross-bench peer) Robert Skidelsky has called for Labour to ‘hammer home’ one simple message (something to do with the economic ‘recovery’ not being that hot). Alastair Campbell argued bizarrely that Miliband should defend Gordon Brown’s economic record. Caroline Flint even suggested that leaders don’t have to be popular.

All of this rests on a basic but unspoken presumption popular in the political class - that effective political leadership is about promulgating a patronisingly ‘simple’ message for a largely passive and mostly uninterested public. What if, however, we saw this presumption as the problem, rather than an inevitable constraint within which the political class is ‘forced’ to operate? And further, what if we recognised that this public disaffection and disengagement is not an inevitable function of more colourful distractions being available elsewhere (e.g. X Factor’s on telly tonight), but itself a creation of the political class - and to some extent a deliberate one to keep the public out of politics except when they are needed (once every five years or so)?

In response to Burnham in particular, Miliband said (and see if you can spot the problem here):

“What Andy is saying - and Andy is doing a very good job in taking the fight to the government on the health service and the crisis in A&E - is that what we are doing as a Labour Party is setting out how we would change the country. Just take this area of the cost of living crisis. Have Labour got answers? Absolutely we have got answers on rail fares, on energy prices, on a fairer tax system. They are all the things I believe the country wants and that is what we are going to be talking about in the coming months.”

The problem isn’t that this response contains little actual meaning (we’re used to hearing blah from politicians after all). Rather, it illustrates what may be Miliband’s real dilemma - being caught between the need to appear like a leader who has ‘the answers’, and the sense that he understands that the public’s disaffection with the political class has reached a level that people don’t believe that any politician has the answers and that they won’t be fooled again.

Ed Miliband’s underlying ‘failure’ since he became leader is less about positioning, ‘narratives’, or even shouting louder - it’s his apparent reluctance to make a decisive and consistent break with the assumptions of political class and in particular its notions of leadership in an age where the public doesn’t believe that politicians can or even should lead in the old fashioned way.

Miliband has indicated he gets this - witness his interest in the community organising approach to politics, and his intermittent speeches contrasting the ‘old’ and ‘new’ politics. What he hasn’t done is followed his thinking through, no doubt in part inhibited by the Liam Byrnes around him who caution a hedging, focus group-led ‘safety-first’ 35 per cent ‘strategy’ (irrespective of the obvious fact that even if this strategy were to be successful it wouldn’t provide the political legitimacy to make the kinds of radical changes to our politics and economy that Miliband says are required).

Miliband won’t be told this by friendly think tanks of course, whose influence depends on privileged political class access. His behind-closed-doors policy review groups won’t come to this conclusion. The media political class won’t suggest that Miliband ignores their Westminster village advice, and senior Labour figures won’t recognise that it’s their top-down control of the party that ensures its inexorable decline.

Ed - you’ll continue to be bullied by the public schoolboys who run the country for being ‘weak’ whatever you do, because they’ve heard from focus groups that this line plays. The way to respond is to distance yourself everyday, again and again, from Westminster and the political class, to depict them for what they are - a tired, discredited, hollow and self-serving elite - a position that the public already happens to strongly agree with. Call for a clean-out of the stables. Let the public know that you’ve noticed the problem isn’t in individual policies, it’s in the system that makes the policies - and the facile, chest-beating notions of ‘leadership’ that pander to prejudices as a cover for serving powerful private interests.

Dean Porter - and millions of others - are waiting, and time is running out.

No responses to “The political class: What is Ed Miliband’s problem?”