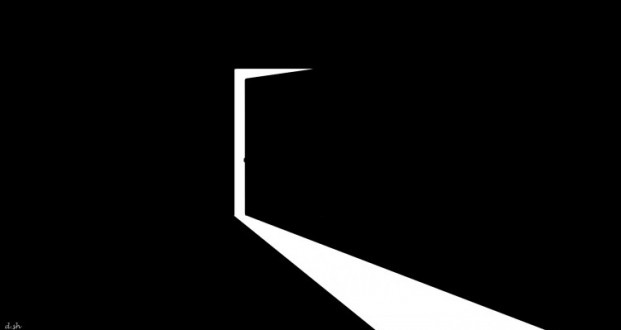 Just over a year ago, the Government published its civil service reform plan, promising to “make open policymaking the default”, recognising that Whitehall itself does not have a monopoly on expertise: ”Whitehall has a virtual monopoly on policy development, which means that policy is often drawn up on the basis of too narrow a range of inputs and is not subject to rigorous external challenge prior to announcement.”

One year on, how has government changed how it engages beyond the ‘usual suspects’?

The simple answer is ‘very little’. A month ago, we did a quick ‘scorecard’ on ‘whatever happened to open government and open policy?‘ We noted that open government and open policy are ambitious agendas and that the Government is to be praised for making these the markers against which it can be evaluated. But we also argued that judging the Government on what it is actually doing suggests that while progress has been made in some areas, the Government is undermining its own efforts by resisting greater openness, particularly when this would be uncomfortable for ministers. In short, there’s still some way to go until, in David Cameron’s phrase, we have the ‘most open and transparent government in the world’.

This applies particularly to consultation - the traditional means of engaging the wider world in developing (or more commonly, reviewing and tweaking) policy. The Government has had a torrid time with many of its consultations, especially when viewed from the frontline and independent commentators. Here’s just a few examples from the last few months:

We could add many other examples to this list, but you get the point.

The picture that emerges from these and other examples is that the Government no longer believes in consultation. In one sense, that’s understandable - when consultation comes late in the policy development process, and when the Government already knows clearly what it wants to do and is anticipating criticism and opposition from organisations it can predict, why should it seek to provide a platform for such organisations to criticise its proposals? Well, because it’s required to of course - but also because the Government says it believes in opening-up policymaking.

This picture is reinforced by the Government’s replacement - again one year ago - of the 2008 code of practice with a set of ‘consultation principles’, which advised that consultations should be more ‘proportionate’. These new principles were criticised by a House of Lords select committee, which politely called them a “work in progress”. As the committee concluded: “The new Principles may allow the Government to make legislation more quickly, but there is a risk that the resulting statute will be less robust because rushed consultation processes make it too difficult for external interests to provide expert critique at the right time. …we call on the Government to recognise that the July 2012 Principles are failing to provide the consistency and transparency that others look for in consultation exercises.” The committee called for an independent, external review of the principles; in response, the Cabinet Office Minister for Government Policy, Oliver Letwin formed an ‘external advisory panel’ (not the same thing) - which has subsequently lacked transparency about what if anything it has concluded, or even who is involved in it.

Also look at the length of current consultations. There are currently 82 open consultations across government. Just focusing on the areas that are of most interest to us - covering social policy - indicates that there has been a reduction in the time that consultations are open from the 12 weeks (84 days) typically suggested in the 2008 code to much less than this:

So, departments appear to be reducing the opportunities for those outside of government to inform policy, and in many cases contravening the principles of good consultation. Of course, on their own, consultations are a very limited (but still important) part of good, transparent, evidence-based policymaking, and it’s true that we perhaps expect too much of them, especially given that they are often carried out too late in the policymaking process, after ministers have committed themselves politically to what they want to do. But undermining consultation without having put in place any viable alternatives only leads to more closed policymaking, not the opposite.

The irony is that the Government has proposed some alternatives, at least in outline. It just hasn’t acted on its own ideas.

We do know - through the Democratic Society’s Open Policymaking discussion site - that the Government Digital Service is developing a repository of tools, techniques and case studies that will help policymakers to do open policymaking, alongside a list of ‘ideal policy team behaviours’ for better, more open policymaking. But the Cabinet Office’s own record of progress on implementing the civil service reform plan only notes, under ‘Open Policy Making’, the commissioning of the IPPR think tank report on civil service reform through the Contestable Policy Fund. Government commissioning a report on a question determined by ministers and only published after it has been reviewed by ministers and civil servants is not open policy - it’s business as usual.

For open policy, we need to engage the ‘unusual suspects’. Government itself has proposed broadly what this should look like (the table below is taken from the reform plan itself) - note in particular the “Policies test/prototyped by users/frontline for practical viability”: 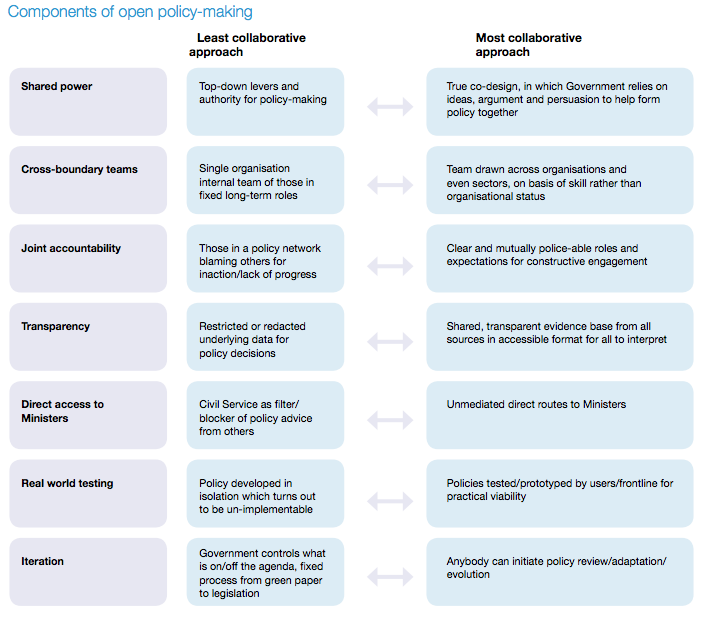 The reform plan also proposes the use of web-based tools, platforms, and new media to widen access to policy debates to individuals and organisations not normally involved, including “Getting wide public input by “crowdsourcing” questions to shape the definition of the problem, not just consulting on solutions.”

Further, in May the Public Administration Select Committee published a valuable report on Public engagement in policy-making, again urging policymakers to go beyond the ‘Westminster Village’. The report concludes that “There is great potential for open and contested policy-making to deliver genuine public engagement. There is also a risk of disappointment and scepticism amongst the public about the impact of their participation, and that Government listens only to the media, lobbying and “the usual suspects”.

The picture generated by what has been implemented in the year since the public of the civil service reform plan suggests that, despite the Cabinet Office’s work to progress open policy, scepticism is not only a risk amongst the public - it’s also prevalent in many government departments as well.

No responses to “Guerilla Voice: If consultation isn’t working, where’s the alternative?”