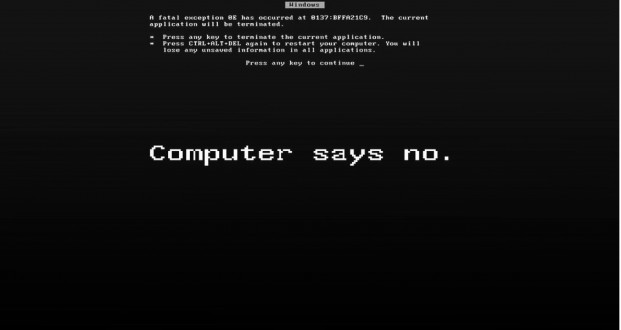 “digital services that are so straightforward and convenient that all those who can use them will choose to do so whilst those who can’t are not excluded”.

I’d like to suggest an alternative – Human by Default.

Human by Default is the idea that if you need to pay tax, apply for a student loan, have  a query about your pension or need claim benefits or tax credits, you are dealt with by a human being instead of a by a machine. I define Human by Default as:

“human services that are so human that they work well for all humans”.

Human by Default might sound new fangled and far-fetched but it actually has a lot going for it. This is why:

1. Because we are human beings, not transactions

No one says, “Treat me like a transaction”. No one thinks of their query or problem as aseries of separate parts. When you get a single letter you don’t understand from the tax office, you don’t think “I am a transaction and I have been completed”. When you ring a call centre and they can only deal with one part of your problem from a script, you think “why can’t I just speak to someone who can sort this out?”. When your benefits are stopped because of an administrative error, you want to be treated like a human being.  When you come up against a computer that says no, you get cross and try to get through to someone who can help you. When our human demands are complex, only a human will do.

We are human beings, not transactions.

2. Because Human by Default is cheaper

The Government thinks it is cheaper to put services online because the cost per online transaction is lower than the cost per face-to face transaction. That is true. But the actual costs of service is the total number of transaction it takes the customer to get what they need. For example:

- You fill in an online form (costs government £3.05 in staff time for someone to check and log it at the other end)

- You get a letter in the post 2 weeks later asking you to fill in another form that you didn’t realise you had to fill in (costs government £1.96 in staff time, printing, paper and postage costs)

- 6 weeks later you ring to find out what’s going on (costs government £2.35 in staff time to handle your call)

- 1 week later you get a letter that you don’t understand so have to ring the call centre to speak to someone (costs £2.20 in staff time)

- You are asked to send in a copy of an additional document before your application can be processed. This costs the government £3.05 to log it, process it and send you confirmation they have received it.

- 4 days later you get the loan paid into you bank account.

- You ring up to make an appointment. While you are on the phone, you are asked a few questions and asked to bring various documents with you (costs £2.05 in staff time)

- The following week, at a brief appointment, you discuss your circumstances, the  member of staff fills in a form and takes some photocopies (costs £8.60 in staff time and photocopying)

- 1 day later the loan is paid into your bank account

The total cost of face to face is cheaper in this case because the human is cleverer and faster than the online form and scripted call centre. The human in front of you doesn’t suddenly give you an error message without warning, ask you for a 5 digit identification code every time you want to ask a question or tell you your postcode isn’t valid when you know it is.

Francis Maude would call the first scenario ‘cross channel duplication’, i.e. the need for the customer to use different channels because the first one (the digital channel) didn’t work. You wouldn’t call it that though, would you? After having to make a series of frustrating phone calls and trips to the post office, you would call it an absolute ******* shambles.

Francis Maude thinks the answer to this is to design the digital part better to avoid  the follow on phone calls and letters. But how can an online form ever be as smart as a human being?

When what we want is very simple and when we all want the same thing, online works great, doesn’t it? For example, moving your money from one bank account to another, renewing your car tax or buying a book. There isn’t much variety. There’s no endless list of possibilities or room for misunderstandings and errors. The computer can deal with easy and simple.  But is this situation really the default when it comes to Government services like claiming benefits and paying tax? Isn’t it the exception? How do you feel when waiting in a HMRC telephone queue to be told that it would be quicker to go online? Isn’t that why you are ringing? Because going online didn’t help in the first place?

Services should be digital only when our demands are very simple and unvarying and even then with caution – given the % of the population not online or able to use computers. The government has got its default wrong.

3. Because humans will never go out of fashion

Humans aren’t a fad. They are a renewable resource. They don’t all ‘go down’ at once like computers do and they don’t cost billions to install because they are already here. Francis Maude thinks digital by default services are the future:

“Britain is in a global race and that’s why we need to have modern, efficient, digital-by-default public services that are fit for the 21st century”.

I disagree. Public services aren’t about showing off to other countries. They are about real human needs in this country, regardless of the century. We don’t particularly want modern or efficient, we just want services to work. To make them work, they should be Human by Default.