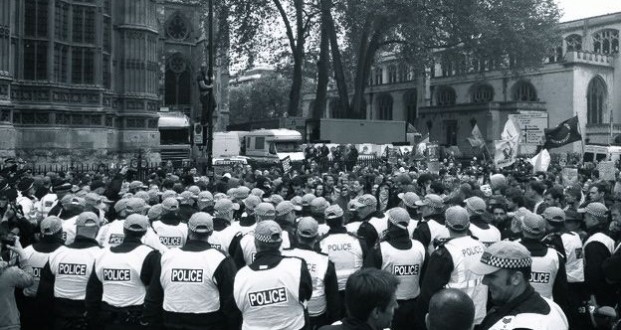 The Mid Blue Line – a police perspective on public protests

Over the past week I have taken part in a live web-streamed debate on policing protests as part of the Sussex Police 10 Days Live event, which also prompted many other interesting and useful conversations on Twitter. There was a large amount of interest in the police role at demonstrations, a variety of perceptions  and clearly an appetite for more information, much of which has been generated by the fracking debate. I have always tried to write blogs according to interest and needs, and as those of you who have read my previous offerings will know, I try to provide something which is not in any way academic or claiming to have all of the answers, but offers some personal insights which might provoke thoughts and discussion elsewhere.

It is a substantial subject area, but I will try to cover key points relating to cultures, common practices and dilemmas. What I am unable to do is discuss politics or the merits or otherwise of a particular cause, and I hope the reasons for this will become obvious. For those of you who are not familiar with me, I have been a police officer for twenty years, I have worked on and off as a public order officer during that time, and I have been an accredited public order commander either out on the ground or at the tactical level for many demonstrations and football matches. I am passionate about the rights we are privileged to have in the UK, and proud to work in the diverse and expressive city of Brighton and Hove.

The police management of protests continues to be a contentious issue, with frequent criticism of some police tactics such as the use of containment (kettling) and alternating claims of heavy-handiness (G20 protests) and ineffectiveness (London riots), both documented accurately in  some sectors of the media, and sensationalised in others. Policing in a digital age also means that a camera is usually only a few feet away from us, to film something which is then visible worldwide a few minutes later: scrutiny is everywhere. This is not necessarily a bad thing, especially when you consider the tragic death of Ian Tomlinson and the disgraceful behaviour of an officer who abused his position and let his colleagues down, but in other cases short clips do not always tell the full story. What they will always do is shape the critical perceptions of the public we serve, as members of the public, and influence the support and consent that they afford us.

“The police are the public and the public are the police; the police being only members of the public who are paid to give full time attention to duties which are incumbent on every citizen in the interests of community welfare and existence.”

I would like to briefly touch on some of the police structures and practices. Our command structure is set at three levels 1. Strategic – setting the intentions, priorities and policing style 2. Tactical – directing the approach and tactics 3. Operational – implementing that. The strategy will usually reflect different needs, with safety being the key priority, and others often including: facilitating peaceful protest, solving crime, minimising disruption, and sustaining public confidence. These are not just words or aspirations – they are translated into the briefings that officers receive and influence the approach of commanders. They also reflect different fundamental rights and needs of those which might include protestors, local residents/businesses, employees of a company, as well as the officers working on the operation. How those are prioritised depends on the circumstances at the time, for example: the right to protest will often remain a high priority, but an unacceptable impact on other needs, specific intelligence, unlawful activity, or disorder might affect that. National Association of Chief Police Officers guidance (Keeping the Peace) encourages consistency across the country. Police will usually face the unexpected but are expected to make a reasonable and proportionate decision, often within seconds of something happening – a consideration which is not usually acknowledged outside of the police service.

Our role is to keep the peace (prevent harm and damage), and enforce the law. Police officers will have their own views and would have voted for either one of the political parties in the general election, but their role is according to current criminal law. Also relevant to this is the reality that most of the public expect us to use a proportionate level of force if someone is behaving unlawfully and refuses to comply. This use of force also has to be lawful in the circumstances and proportionate to the threat that officers face – police cannot be above the law. In this constantly changing environment, officers receive pass or fail training twice a year in defensive tactics and the use of safety equipment, with particular emphasis on the safest and most effective techniques, as well as effective communications remaining at the core at everything we do – unless there is an immediate danger, we will always ask first. The constant challenge for leaders is to encourage officers to talk to people after receiving hours of abuse or anticipating further violence – as human beings, they have the same concealed fears and frustrations as anyone else, especially after having asked people to move several times and been ignored or told where to go.

Earlier I mentioned the significance of perceptions and this is never more significant than when it comes to mixed gatherings. I have met many good people at protests, and I have a great deal of respect for those who care so much that they will take to the streets and express their concerns – behaviour which in the past has resulted in change for the better. I have been on marches with other officers, and as a father I would be proud of my children if they chose to protest peacefully for something they believed in. Many protests pass off calmly with the cause achieving a high profile, and it is even possible for direct action to remain peaceful and without significant impact on others sectors of the community. In recent times this has been supported by the use of Protest Liaison Officers who meet with the organisers to discuss the needs of the groups, other issues they need to be aware of, and what the police are obliged to do. This encourages trust and transparency on both sides. Unfortunately there are groups of activists around the country who are completely opposed to any order in society, and see violence as a legitimate means of protest – they are frequently in the area of disorder when it starts but ensure that they are not at the forefront. They do all that they can to cast doubt upon the intentions of the Liaison Officers, claiming that they are intelligence gathers, and I have seen some shameful acts of harassment and even assault on these officers as they try to maintain dialogue with those who wish to keep things peaceful.

Through the effective use of intelligence and sometimes containment, we attempt to manage those specific individuals who seek physical confrontation, but this is not an exact science and we are doing more to ensure that any containment, aka kettling, is selective and proportionate. If a group is moving around and causing disorder, they need to be managed. Crowd dynamics are a key element of what occurs at demonstrations, and the arrest of an individual who has committed a crime is often perceived by others as an unfair attack on the right to protest or the needs of the groups as a whole, there is then the risk of increased tensions and further disorder. For that reason, arrests are not made without that consideration, but there is irony in that they often support the rights of others to continue with a peaceful protest. The validity of the police in those situations remains under constant scrutiny and it only takes a perceived or actual police wrong, for us to then face a disaffected or even, hostile crowd.

I will now talk about public order officers, most of whom perform the role in addition to their day job which is usually within another area of neighbourhood policing. They also receive regular training, when they are expected not only to face bricks and petrol bombs, but also to talk and engage effectively with ‘protestors’ during the peaceful phases of the exercises. Very often they will go on to police protests where their role is critical but their presence unwelcome, sometimes by opposing sides whose only common agreement is that the police favour the other side! This observation is not an appeal for sympathy but a case for understanding, due to the officers frequently finding themselves in the middle of opposing groups or agendas, expected to have broad shoulders and doing the best that they can in the circumstances. I have met very few officers who did not genuinely care about what they do and committed to trying to keep people safe – it is not a job you could tolerate just for the occupational benefits which are gradually being eroded.

It’s unfortunate but a logical consequence, that we are routinely criticised by those who are opposed to the government of the day, whether they be led by coalition or a majority party.  We are sometimes perceived to be agents of the Government and imposing their will, when in fact we are enforcing legislation which sometimes dates back over several ruling political parties. There is also a suggestion that we should ‘think for ourselves, oppose moral wrongs and stand for what the public wants’. Which public – those protesting? those who voted for the Conservatives or Liberal Democrats? employees of companies such as Cuadrilla? the many who choose not to care about a particular issue and wish to get on with life? Therein lies the rub: the public is diverse, but most are united in expecting us to work within the law as enacted by their elected Governments. It is still down to individual officers to exercise professional judgement and ensure that the rights of freedom of expression and lawful assembly are supported whenever possible, but there would be a clear threat to our democracy if they were expected to define moral rights and wrongs as they each saw them.

Neighbourhood policing has made giant strides forwards since the race riots of the 70s and the service continues to do all that it can to meet the diverse needs of different communities, including protest communities. The policing of protests has become an extension of neighbourhood policing and does not require officers in ‘riot gear’ unless the risks require it.

We are as diverse in our personal views as the public we represent, yet have to serve with a common purpose in the interests of our society. There will be some who let us down and we are unified in saying that there is no place for them in our ranks, but, in spite of the provocation and abuse they often face, the overwhelming majority of those I work with are professional and committed public servants, standing shoulder-to-shoulder where others would rather not.

I hope that this has been interesting for you and I have also managed to reflect some of the thoughts of colleagues within my own. I have set out the details of what is happening, and in the absence of any change to the police role, we will continue to serve as best as we currently do – employed by the Queen without contract, to serve all of the public and the range of beliefs they hold .

“Protest to the left of me, counter-protest to the right, here I am, stuck in the middle with you.” (with apologies to Stealers Wheel)