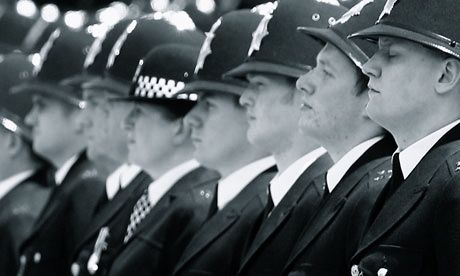 Posted in
Originally posted on NJG28Blog

After the onslaught on the pay and conditions of service of police Federated Ranks (up to and including Chief Inspector) over the last couple of years, The Association of Chief Police Officers (ACPO / @policechiefs) has finally broken its “radio silence” regarding this Government’s plans to change the face of policing in England & Wales.

There was also a more vocal than normal Police Superintendents’ Association yesterday.

Both were voicing concerns over Government plans for Policing. A coincidence perhaps?

Sadly not. Yesterday The Home Secretary, Theresa disMay, announced plans for direct entry to Inspector and Superintendent ranks, sweeping away the traditional position that all recruits, even those on fast-track promotion schemes, must spend 2 years on probation as a constable and serve in each preceding rank. She also announced her intention to change the law to allow foreign nationals to be directly appointed as Chief Officers of Police in England and Wales (Chief Constables and the Commissioner of The Metropolitan Police and their deputies/assistants).

You could be forgiven for thinking that Sir Peter Fahey was the most senior police officer in the UK, so often has he been trotted out on television and radio, supporting the Government’s plans to “reform” the police. To date, you couldn’t get a fag-paper between his views and those of T disMay.

Suddenly he was in the media expressing “concern” over Government plans.

Even with his “ACPO Lead – Workforce Modernisation” hat on (now given the natty title of “Workforce Development – so much softer, don’t you think?), Sir P is worried that the Government may be wrong in wanting to appoint foreign police chiefs directly to ACPO rank in England & Wales.

Of course, Sir P is IN FAVOUR of disMay’s plans for direct entry to Inspector rank. That’s “workforce development”. He is also VERY much in favour of replacing police officers with civilian support staff for all roles where warranted powers of arrest are not routinely required. Obviously he EXEMPTS  Chief Constables from this train of thought.

Sadly, Sir P LOVES all forms of “Workforce Modernisation” – unless it includes HIS job, or those of his ACPO mates!!

I was also saddened to hear an interview with Irene Curtis (@barrackslass), President-elect of the Police Superintendents’ Association, where she stated that she had “no problem” with direct entry to Inspector rank but was worried about the dangers of direct entry to HER ranks, “… because Superintendents are the operational leaders of the police service”. So another “it’s okay for you but not for us” stance.

I wonder who she thinks does the “operational leading” for spontaneous critical incidents between 1700 – 0900 Monday to Friday and over the entire weekend – before a “Supt on-call” can be contacted and can attend?

In contrast, it seems that the Police Federation of England & Wales sees the dangers of direct entry at all three levels and supports the sensible principle that all police officers should learn their craft at Constable rank and that all senior officers should serve, even for a short time, in all preceding ranks.

As a former Inspector – a Federated Rank – I am against all three proposals, based on my 30 years experience.

Sadly, those whom I thought had developed sore throats in recent months (thereby explaining their inability to speak out), have now “found” their voices when THEIR members are affected but they don’t much care what happens to the canon-fodder.

So much for their “leadership”.

If it wasn’t so serious for public safety, the whole debacle would be laughable!

To quote T dismay, “You ARE the best police service in the World”. If only she had MEANT it. Apparently, policing is SO EASY, their starting pay can be reduced by £4,000 to £19,000, whereas being an MP is SO DIFFICULT, they need a massive pay rise to over £80,000.

That will be “fair to the taxpayer” then!