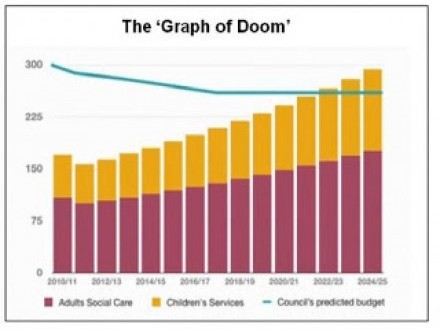 Here’s our selection of the best frontline blogs we’ve read this week – from local government finances, to payment by results. Do send us your suggestions for great posts we’ve missed – and those frontline bloggers we should follow in the future.

Graph of doom - fact or fantasy - an alternative perspective

“Barnet Council have been pushing a chart …which has gained the rather unpleasant title “The Graph of Doom” to show how the Council will run out of money for any services other than Adult Social Care and Children’s Services by 2030. This chart has been used in Cabinet documents to justify the need for the One Barnet Outsourcing programme. It has also gained traction in the national press where it is seen as a revelatory document which we should all be accepting as the gospel according to St. Barnet.”

A ‘reasonable and respectable resident standing up for common sense’ in the London Borough of Barnet dissects the infamous (in policy circles, at least) ‘Graph of Doom’ - and shows that the reality is more of a ‘Graph of Choices’ instead.

From Diary of a Benefit Scrounger

“No matter what we did, we had to break the consensus. We had to make sure that the opposition opposed. Just two years ago we had nothing and no-one. Today, we have a very different board to play on. Many will say it is not enough, and of course, they are right. But as a friend once said to me, “Don’t judge on where someone is, judge on how far they traveled.”

Sue Marsh provides a perspective on this year’s Labour Party conference where disability issues finally made it into the mainstream - after a massive effort by campaigners and activists.

From On Probation Blog

“As I’m writing this, there are civil servants down in London at the Ministry of Justice drawing up contracts for the benefit of private companies such as G4S. How is anyone to feel comfortable or reassured that they are any better than their colleagues over at the Department of Transport in being able to fairly assess the relative merits of different bids, and especially those that have to be measured against public sector bidders?”

Jim Brown speculates on what the West Coast mainline franchising fiasco means for the outsourcing of prisons and probation services by the Ministry of Justice.

Children shouldn’t be responsible for filling gaps in care

“One of the problems we face is that where local authority care budgets are cut, then if someone has care needs, that care still has to be provided by someone - and it inevitably falls to friends and family to provide it. This is hard enough for adults, and we know many are struggling to cope with cuts in services and family finances. We need to make the point crystal clear that it is never acceptable to expect a child to fill the gap in care which is left when services are cut.”

Moira Fraser of the Carers Trust reports back from the Labour Party conference and shares her concern that those organisations working to support young carers are not communicating their messages clearly enough.

“There are some basic facts that need to be cleared up. You wouldn’t think “facts” needed clearing up would you because they are facts; the truth and therefore should be clear to all. Unfortunately Mr Green the Policing Minister has either been misinformed or is not telling the truth.”

Welcome to a new frontline blogger, Police Aircrew. In their first post they debunk the facts that have been presented to rationalise the police helicopter service into the new National Police Air Service. The new service is designed to save £15 million a year; in this post Police Aircrew speculates about further cuts that are coming down the line.

If Michael Portillo forgets you…

A ‘woman, mother, wife, carer and retired Met officer’ reflects on how the quasi-official appearance of private security company employees may have affected how the public perceive the police as just another group of ‘jobsworths’.

Here’s another great post published in the last few weeks.

From The Masked AMHP

“Most mental health service users will be completely unaware that when they are assessed by Community Mental Health Teams or in hospital their mental health problems and symptoms are now subjected to an arcane system known as Clustering.”

The Masked AMHP describes the impact of the use of clustering and payment by results in the commissioning of local mental health services - and argues that the real ‘customer’ under this approach is the new GP consortia rather than service users.

If you’re a frontline blogger, do send us your latest blogs on policy issues or posts from the past that you’re particularly proud of, and they could be included in next week’s round-up. Get in touch with us at: [email protected] or via Twitter @guerillapolicy