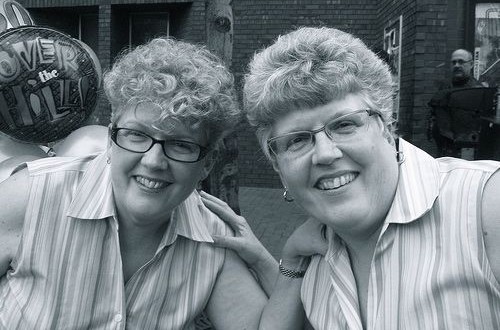 Bedroom tax – the tale of identical twins and Tories, Sheila and Patricia

Imagine a set of identical twins in Liverpool who would ordinarily be celebrating the “Big five-0” on Wednesday having been born with minutes of each other on April 3 1963. They not only still look the same their lives have been the same in almost every aspect. They married a pair of identical brothers at a double wedding in April 1984 and became Sheila Jones and Patricia Jones and dropped their maiden names of Smith.

They each had two sons and two daughters miraculously they were twins too and born on the same day in 1986 and 1988. These 8 children were left fatherless on 15th of April 1989 as their dads went to a football match and never came back. Sheila and Patricia are doughty sorts and very hardy women and they went out to work and brought up their children well as they have a work ethic ingrained in them from their Tory voting parents. This is the same Tory party they have always voted for and many are surprised when they found out the Tories held Liverpool Council for most of the twentieth century.

Sheila and Patricia don’t grumble and never have. They didn’t moan about being a single parent and have always worked until 3 months ago when they were both made redundant. They want to work, they always have. They have a tiny bit put by but only a tiny bit as each bringing up 4 children without a father they probably did spoil them a little bit in hindsight, well at least compared to the good values of thrift they got from mother and father. Yet their 8 dutiful children each have 2 children of their own now so every Sunday the 16 children come to visit their two grandmas as they call Sheila and Patricia – the grandchildren can’t tell them apart! Every week they chuckle at that to themselves as they play with their adorable grandchildren. It’s a good job they now live next door to one another and two of the fence panels have been removed so that everyone can wander into both houses which they do.

One tiny difference is that Sheila rents her 3 bed house from the local social landlord but Patricia rents hers from a private landlord who was Sheila’s former neighbour and took up the right to buy. He now rents this to Patricia.

Sheila and Patricia’s house are identical too. Yet Sheila pays £80.77 per week for hers and that until last week was all paid by Housing Benefit. Patricia pays £121.16 per week for hers and is still all paid for by Local Housing Allowance or LHA the private version of Housing Benefit. Patricia knows that typically a 3 bed private house rents for £140 or so per week but the landlord being a former neighbour has kept her rent at what the local council will pay in Housing Benefit for a single tenant or couple at £121.16pw as Patricia is a good tenant and is always like Sheila a week in advance on her rent.

Patricia the private tenant is very worried about her sister Sheila the social tenant as the local council are reducing her £80.77 per week Housing Benefit by 25% and only paying £60.58 per week because of the ‘bedroom tax.’ Patricia is genuinely worried that her sister Sheila won’t be able to find the shortfall of £20.19 per week from her £71.70 per week JSA. How is my sister going to live on £50.51 per week she thinks!

Yet Patricia is also bemused and to be honest angry. How can the benefit system pay me £121.16 per week to live in the exact same property as my sister, yet only pay her £60.58 per week? Patricia was always good at maths and realises she is being paid exactly DOUBLE the amount in Housing Benefit than Sheila and ONLY because she is a private tenant of a private landlord. Yet that nice Mr Duncan Smith says this ‘spare room subsidy’ is fair and he is a Conservative after all so of course I believed him. Yet he was not telling the truth at all was he Patricia now realises and this is distinctly unfair and just not….well just not British!

What was that IDS? The bedroom tax is the same as what that ‘last lot’ did to private tenants? Your spare room subsidy just creates a level playing field?

Note: Sheila and Patricia are invented names reader. Yet the rent figures I quote are accurate and the private tenant will get DOUBLE the amount of Housing Benefit as the social tenant as simply and ONLY because the tenant and landlord and the tenancy are private.

Courtesy of Joe Halewood of SPeye

No responses to “Bedroom tax – the tale of identical twins and Tories, Sheila and Patricia”