It has taken a year in the making but I was so proud to see the book I had contributed to on a shelf at WHSmith the other day.

Last year a few of us sat down and realised we needed to set the record straight on the betrayal that the NHS was subjected to by the coalition’s Health and Social Care Act. We knew we all had knowledge that had to be imparted so that those looking back in years to come knew who had not acted as they should have done in defending our NHS. 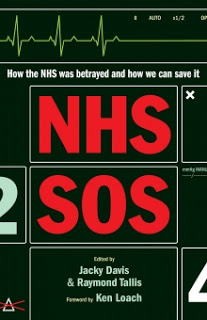 There are many culprits. They range from the media who for whatever reason decided to give very little coverage to the NHS sell off to the leaders of the medical profession who ‘critically engaged’ with the coalition and allowed the government to say ‘doctors are on board with this and engaging with us’. That was a truly disastrous policy that has led to the situation now where the NHS is being parcelled up and sold off to the private sector. It may well be too late to turn the clock back.

The chapters I wrote detail the shocking actions of politicians who played their role in ensuring the Health and Social Care Act became law and another chapter reveals how the leadership elite of the medical profession sat on their hands and allowed themselves to be taken in by the coalition rhetoric.

Those who wrote chapters for the book took not one single penny for their efforts and every pound of profit goes to Keep Our NHS Public - an organisation I fully support. KONP runs on a shoestring so hopefully the profits from this book will allow it to continue the fight to defend our NHS.

Please do consider buying and reading the book - it may well elevate your blood pressure but it will reveal the shocking truth of how the NHS has been well and truly sold down the river. It is also being sold as an e-book so you can download it anywhere in the world! Tell your friends and family to read it  - there is still time to save the NHS and the final chapter details how we can do this.

You can buy the book via Amazon here - and if you prefer to use an alternative provider the publishers are selling it here.

No responses to “NHS SOS”