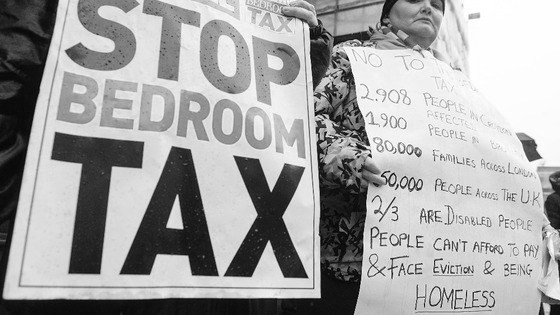 The level of anger and fight the tenant and activist has put against at the bedroom tax policy has surprised me. Tenants have been mobilised into huge numbers and quickly aided largely by social media. The first indications of non-payment and part-payment of the bedroom tax shortfalls are way above expected with Riverside stating 50% non-payment and 25% part-payment.

What goes with this sudden large mobilisation of anti bedroom tax protesters is a huge level of misinformation and the old adage that a little knowledge is a dangerous thing is very pertinent. Rumour becomes fact and from the ridiculous such as Muslims can call a bedroom a prayer room to avoid the bedroom tax (FALSE) to more subtle ones such as the Council can’t include DLA as income for a DHP claim (THEY CAN) to dangerous ones such as the tenant doesn’t have to pay if they are appealing (FALSE) abound.

I get asked to speak with bedroom tax groups weekly and one night last week I was asked to speak at 4 separate meetings locally.  This shows a certain lack of co-ordination although all these bedroom tax only groups have agreed to form a federation and a long way down that line and it also shows the number of groups which are out there, the scale of this mobilisation and groups with of course some more vociferous and established than others and more being formed every week. Within a 5 mile radius of Liverpool there may be as many as 30 anti-bedroom tax groups alone and many of these also include other local campaigning groups such as protests against library closures or fire station or post office closures and we are witnessing a huge surge of community activism.

In short this mobilisation at grassroots or community level in Liverpool and wider Merseyside is a huge phenomenon and goes beyond just the bedroom tax, though undoubtedly this is leading the way and the catalyst for this upsurge of protest. It is also here to stay will each group (bedroom tax, anti fire station closure, etc) supporting the causes of the other.

I have spoken with many other groups nationally and national anti bedroom tax protest groups are forming too and at one recent national meeting the delegates there had well over 35,000 members between them in their groups which when you consider that the Chartered Institute of Housing (CIH) has only 22,000 or so members representing landlords and built up over decades, we see both a huge power bloc forming and a huge speed of mobilisation of this ‘tenant power bloc.’

From October this year just 4 months away tenants take control of rent payment with Housing Benefit being paid directly to them and not as now direct to social landlords. I use the terms ‘tenant power bloc’ very deliberately as from October this is a fundamental power shift, a complete about-face that will happen and social landlords should be very worried indeed about this.

The same social landlords who are bombarding and harassing tenants with red-inked letters with phone calls, unexpected visits, text messages and more will from October be having to get on their knees and beg tenants to pay their rent ahead of other priorities!

Throw in other issues such as monthly payment of benefit and paying council tax for the first time and below inflation welfare benefit increases while household expenditure costs such as food and heat and power increase by 5%+ and the scale of the financial nightmare for the social landlord becomes apparent.

Yet way ahead of October and from mid July, just 6 weeks away the overall benefit caps (OBC) of £500 per week for families and £350 per week for individuals begins its national rollout. The OBC has an average benefit cut of £93 per week and almost SEVEN TIMES HIGHER than the average bedroom tax cut.

As we have seen huge mobilisation of grassroots campaigning groups develop very quickly over the bedroom tax and huge justifiable anger that a £14 per week cut has life-changing consequences for those hit by the bedroom tax then imagine what will happen when these groups realise the OBC is a £93 per week cut to Housing Benefit? Anger and numbers will increase markedly.

Firstly I am not stating some politically argument about a huge upsurge in ‘true democracy’ or any such naive nonsense. Yet the other extreme is ignoring this ‘movement’ which I am sure the coalition hope will be the usual infighting by the multitudinous left-wing groups and nothing gets done – the often valid point that in political terms the socialists. Marxists, anarcho-syndicalists et all couldn’t organise a piss up in a brewery. From meeting with and speaking at such anti bedroom tax groups there is clear evidence of a rag bag of ‘left’ group involvement but so much more and clear evidence of ‘ordinary’ people stopping them in their tracks. The vast majority of the members of such groups are people who have never been political activists before, ordinary people who have just said enough is enough and decided for the first time to say. Note that throughout this paper I have been putting such pejorative and negative terms as activist and protester in italics as these ‘ordinary’ people certainly don’t see themselves that way and have never been active in that way before.

These ‘ordinary’ people cannot simply be ignored and woe betide anyone that tries or attempts to underestimate what they can do. These are very determined and resolute people who are having no truck with the usual activists and ‘agitators’ and not being led or steered by them. The focus of the tenant power bloc remains the issue and not the politics around it whether that is the left wing groups or the EDL/UKIP infiltration that is being attempted too. These ordinary people are rejecting both left and right wing ‘opportunists’ that smell new members for their causes!

Doubtless if the capital had the 43% or working age tenants affected as the North West does rather than ‘just’ 22% or half, then issues such as the new ‘tenant power bloc’ or grassroot movements would be filling the papers and other media who tend by and large to see any ‘movement’ or ‘trend’ having to start in the capital and not in the provinces or ‘Oop North!’

At an average £93 pw cut in Housing Benefit and likely higher in London given their ridiculous high rent levels, both private and social housing, this level of OBC cut guarantees eviction for arrears leading to a huge increase in homeless families. The 47% in London means somewhere between 26,000 and 42,000 families alone who will not only be made homeless through arrears evictions and placed in temporary unsuitable and often dingy B&B ‘hotels’, they will also be exported out of the capital to cheaper rental areas such as Liverpool and Hull. In fact one such case still in its early stages of a couple with 3 children being ‘exported’ from Newham to Liverpool is beginning to get media attention. It deserves such attention too as if this case progresses to higher courts as seems likely then it will have huge ramifications. 42,000 families means in excess of 200,000 men women and children being displaced in this homeless diaspora and poverty cleansing of the capital. It could be much higher and as many nationally as 500,000 men women and children being displaced and uprooted and packed off to other areas – a population larger than the city of Liverpool being displaced!!

Again imagine just what this will do to tenant and thee ordinary person in terms of the development and mobilisation of the ‘protest‘ groups! They will only get bigger and stronger and begin to wield some significant power and influence and even if that takes the form of ‘mere’ direct action then it will still be very significant and on a national scale. Once mobilised these groups won’t just suddenly disappear even if the government repeals the bedroom tax. Specifically and in social housing terms come October when tenants get absolute control of rent payment by receiving Housing Benefit directly the social landlords are in a serious financial predicament, and serious in the sense of going bust. The OBC in how it works only cuts Housing Benefit and so like the bedroom tax is an attack on social tenants, social landlords and social housing itself. The social tenant, social landlord and social housing sector generally has fundamentally missed this critical point and instead focused on bedroom tax and bedroom tax alone.

They did not imagine the social tenants would form such power blocs and protest. They only saw social media in one dimension – what it did for landlords in engaging with the tenant – and not what it would do for the tenant engaging with the landlord.  Naivety and incompetence writ large by social landlords and a huge misjudgment on their part. The social landlords have paid lip service to tenant involvement for years and have become used to that and have been lazy in that regard. Yet direct payment of Housing Benefit to the tenant from October means that tenants become a true customer as they have control or rent payment and frankly, the social landlords just dont know how to deal with a customer as they have never had to before.

In summary once the ordinary tenant realises that from October and in just 4 short months time, THEY hold all the aces as they have control then every social landlord’s heavy-handed tactic to gain rent payment as we are now witnessing will come back to haunt the social landlord. The social tenant and ordinary person led anti bedroom tax groups will continue to develop and expand and will be greatly enhanced and mobilised when the reality of the OBC hits from July and when the press and national news is full of Newham to Liverpool homeless diaspora stories then it will be too late for the social landlords to rethink their heavy-handed harassment of the social tenant which is now happening. Social media means every ‘dirty trick’ and every nuance of this collect the rent at all costs policy of the social landlords is communicated between the burgeoning anti bedroom tax groups daily. Tenants like the customers they will soon become have long memories, just as social housing will become unless the social landlords wake up and smell the coffee and they get four-square behind the tenant cause.

All the while Iain Duncan Smith and Lord Freud and the rest of the coalition are laughing at social housing and the social landlord for their anticipated and incompetent heavy handed reaction they are giving to the bedroom tax! Yet they need to be very worried about the tenant power bloc as they are the only ones with the real power to defeat the bedroom tax and the benefit cap and the rest of the welfare reforms.

Once this tenant power bloc finally realise and accept that they have the power, which as yet they don’t yet believe but should, then IDS will be smiling on the other sides of his two faces.