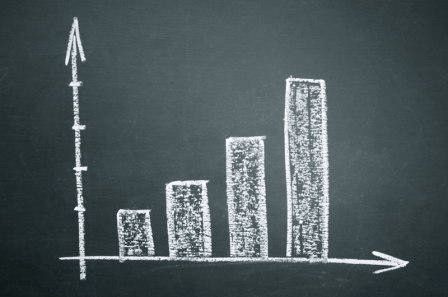 The anatomy of high expectations

Posted in
Originally posted on headguruteacher

A lot has been written in the last week about the experience of able learners in state schools. The OfSTED report published last week was widely reported in terms of failure, despite using a small evidence base of 41 schools and subsequent articles and posts have focused on the issues in different ways:

David Didau, @LearningSpy captures the issue of teaching with high expectations brilliantly and considers the impact of underestimating what students can do in this post: What does Gifted Mean Anyway?

Geoff Barton gives an excellent impassioned response to the suggestion that schools can be lumped together, battered by sweeping generalisations derived from flawed methodology and limited samples in Pass the G&T

Tim Dracup @GiftedPhoenix has argued that the KS2 to KS4 data does actually give cause for concern.

It seems to me that there is value in filtering out what value there is in the OfSTED report and use it as a tool for some self-evaluation. My understanding of these survey reports is that they are meant to explore some general issues; they are not meant to be turned into system-wide judgements and a line has been crossed in this case. Geoff is right to be irritated by the headlines and the general thrust of Michael Wilshaw’s comments when his school doesn’t match the description of a place that is failing the most able. The data doesn’t really stack up either because of the classic bell-curve standards delusion. More children get Level 5 than get A/A* on the bell curve; it is not surprising, therefore, when not all L5 children at KS2 get A/A* five years later. And if they did, there would be a national outcry about easy exams instead of a celebration of success. Tragic but true.

BUT, …from my perspective, it is important not to be defensive on behalf of the whole system when considering teaching the most able, however irritating these pronouncements and damnations are. In fact, as I say in my post about a Total Philosophy of G&T, I believe very firmly that if schools cracked the issue of teaching our most able students, then the whole system would be transformed; this suggests that we haven’t cracked it yet. The data doesn’t necessarily stack up in the way it is presented but, for me, the experience of schooling is just as important as the outcomes.

Let’s look at what OfSTED are saying in terms of recommendations: 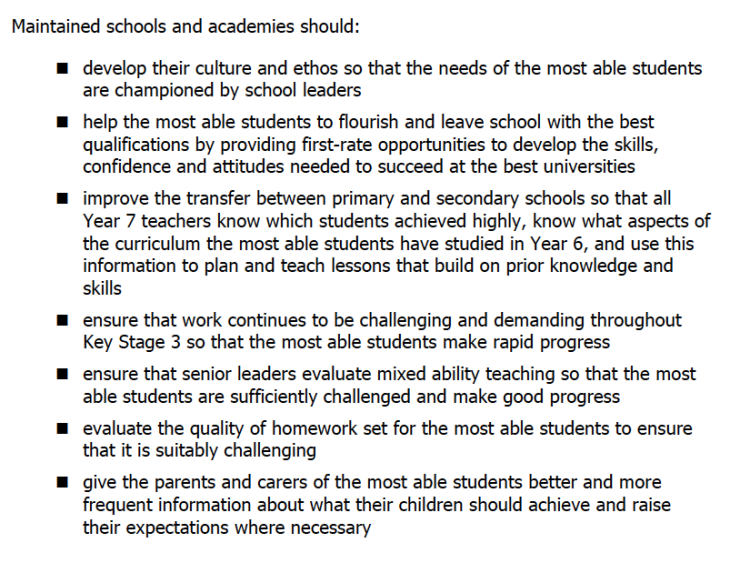 Away from all the rhetoric and dodgy data, these recommendations make perfect sense. My first-hand experience and observation, as parent and school leader, is that expectations can be too low too and these recommendations ring true. How does your school rate against these recommendations? How much further can you go?  It is worth having a very deep, honest look. It isn’t about working hard or doing well despite the challenges….it is about completely meeting needs of the most able, regardless.

In my experience, it is true that some schools do not project a strong culture and ethos where very able students are championed; often bright students are regarded as ‘doing fine’ rather than being enabled and encouraged to find their true limits. I’ve spoken to Heads and teachers who are not entirely comfortable with the idea of academic excellence as an ethos-defining concept and, in their legitimate desire to promote inclusion, they are almost squeamish about talking about universities and Oxbridge. I’ve encountered this on various school visits and engagements and on the school Open Evening merry-go-round as I describe in this post. Some schools manage to project insecurity and lack of confidence rather than giving able students a deep belief that they too can go to the best universities or get the most challenging jobs.

I’d suggest that OfSTED is correct in highlighting KS2-KS3 transition  which is hardly a national success story; I hear this all the time. I’ve called it the Berlin Wall of our system and far too often, Y7s are babied and patronised instead of allowed to fly from the position they reached in Year 6. From Day One, some children are systematically under-challenged; they are not expected to work as hard as they could and their sights are set lower than they could be… in some schools. Maybe not yours..

Setting may not be a panacea but mixed ability teaching is difficult. It may be the most desirable mode of grouping for social inclusion; it may even lead to the best average rates of progress; but, very often, it is not done sufficiently well for the most able to thrive at their maximum capacity. They are held back. I’ve seen that too and I’ve measured it.  I’ve done it myself. The theoretical notion of mixed ability teaching often flounders on the limited capacity of a teacher to make it work; really work. We’re only human.

There could be more research for sure but I’d bet on outcomes that show quality of teaching is the key factor – not the grouping system, if you could apply the necessary research controls. So, for example, a lower ability group taught with high expectations by a great teacher would probably progress better than similar lower ability students in a mixed ability class taught by a mediocre teacher who teaches to the middle. This debate is polemicised too often, reduced to ‘setting is bad; mixed ability teaching is good’ or vice versa without looking at the precise configuration of sets, the quality of provision in each set, the expectations of the teachers, the curriculum and the parameters allowing students to move between sets – against the similar issues in a mixed ability class. The OfSTED recommendation is for schools to evaluate mixed ability teaching – not to abandon it. That seems fair enough to me.

The recommendations about homework and the general level of expectation at KS3 echo what I hear all the time from friends and colleagues, parents with children at my school who compare their experience with siblings at other schools and various school leaders and teachers. Before I joined KEGS, I would say that the most common complaint I received from parents as Head of Year or school leader was the lack of challenge at KS3. I’ve dealt with this issue over and over again; patchy homework, work that is too easy, lessons disrupted too often and teachers too accepting of work that is below par. The KS4/GCSE phase seems to kick everyone up a gear but  it’s a long time to wait for a bright kid in Year 8, once the Year 7 adrenalin has ebbed away.

As I’ve described in several other posts, arriving at KEGS opened my eyes to another world of expectations even though I’ve always been a vociferous champion for the most able. I don’t have time for people who dismiss this as merely elitist or tell me ‘it’s alright for you’ as if their students are not entitled to the same level of expectations as mine. As someone said on twitter recently; teaching 19th Century fiction is not elitist; not teaching it is elitist. I feel  the same about the level of challenge students experience. Instead of suggesting my school’s existence is inherently wrong, people could be saying – OK, let’s see what it would take to match that challenge; let’s get as close as possible to setting our expectations just as high. This is easier in some contexts than in others, of course. But can it be done? I believe so, if the intent is there.

Here is my take on what it looks like to succeed:

The Anatomy of High Expectations:

If you are doing all this stuff already, then great. I know schools that do this and it shows. But if everyone was, I don’t think the OfSTED report could have been written. Let’s have a really good hard look at the reality and do whatever is necessary to raise the stakes.

Courtesy of Tom Sherrington at headguruteacher

No responses to “The anatomy of high expectations”